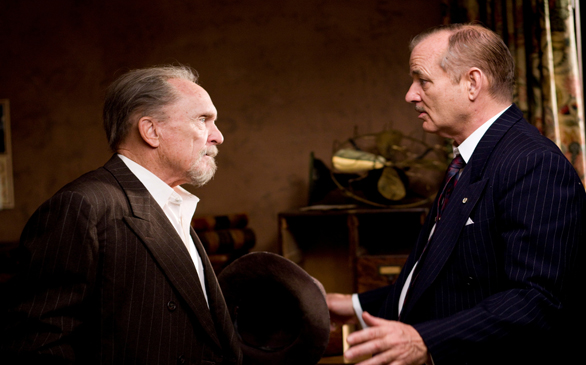 Mark Twain wrote a story once about a little rascal who convinced his friends to do the whitewashing for him and who got all caught up in the affairs of robbers and Indians. This same boy witnessed something very few others (if any) have. He had prime aerial viewing from the rafters of the church for his own funeral service. That’s right, the naughty adolescent Tom Sawyer neglected to die, which didn’t mean he couldn’t be mourned by his deceived loved ones.

If Sawyer were to grow up to piss off all of his fellow townsmen, lose the love of Becky Thatcher and seclude himself in the back woods, then he might as well be Felix Bush (Robert Duvall), the devilishly quiet hermit who is rumored to have killed men and to have made a deal with Satan in the film Get Low. When he makes a rare appearance in town with a shotgun and a gigantic wad of cash, it’s because he’s looking to procure himself a funeral ... a “living funeral” where anyone who has ever heard a story about him would be invited to tell that story to his face.

The priest won’t do it for the old man, but Frank Quinn (Bill Murray), the local funeral home owner, will. With apprentice Buddy Robinson (Lucas Black), Quinn will stop at nothing to make the funeral a commercial success. What they both don’t know is that Felix is hiding a secret that has been the mortar for the brick fence he’s metaphorically built, a self-inflicted shunning from the rest of the town.

Felix’s former flame Maddie Darrow (Sissy Spacek) has returned to town following the death of her husband, and Felix struggles to set free the deep, dark, clandestine truth about how the fire that killed Maddie’s sister actually got started.

Producer Dean Zanuck spent eight years getting this feature made, and with the help of director Aaron Schneider and an all-star cast, the film doesn’t completely fall down the toilet bowl of stereotypical period piece dramas. Bill Murray livens the dreary mood initially set; he is all the laughter the piece offers. Duvall and Black play their parts adequately enough, and you can’t help but fall in love with Spacek’s easy demeanor. But there is a gaping whole missing where plot should be spaciously planted. Get Low might as well be titled “Don’t Get Old and Curmudgeonly” as that is what it so thoroughly discourages.