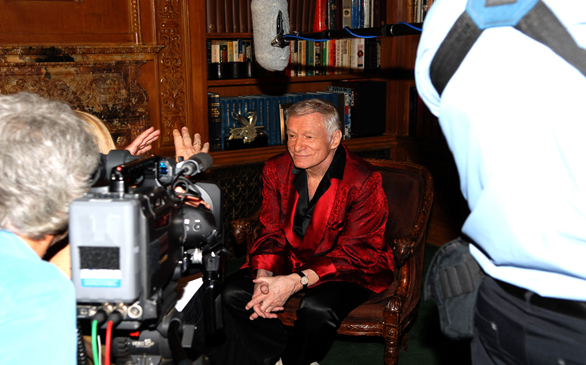 He’s the man we all know and (many of us) love. Hugh Hefner is one of the more compelling figures to emerge from the 20th century. The octogenarian founder of Playboy Magazine takes an insightful look back in the documentary, Hugh Hefner: Playboy, Activist and Rebel.

Hefner’s rise to power as the creator and editor-in-chief of Playboy is explored, as is his personal life. Friends from nearly every generation of Hef’s existence appear in the film (Gene Simmons, Jim Brown, Jenny McCarthy, to name a few) and discuss the myriad ways in which he’s touched their lives, as well as his contributions to the world. One somewhat surprising disclosure is that Hefner is indeed a staunch civil rights activist, which is heavily featured within the movie – perhaps too much.

Although this documentary is informative and entertaining, it does have a preachy, self-aggrandizing streak to it. While it is commendable that this maverick of the editorial world gave voice to many black celebrities at a time when equality was merely a dream, the movie spends too much time focused on that particular point.

It also lacks the style and capturing of the zeitgeist nature of Hefner’s public persona. Why not heighten the narrative by focusing on his recent accomplishments? Am I the only one who remembers he was on a hit reality show or that he’s extended his brand into shows like “Sex and the City” and movies such as The House Bunny? Those are things also worth noting for more than just a nanosecond.

This documentary is in many ways a charming and beautiful look back ... in the same way that having a conversation with your grandma is. But for a man like Hugh Hefner, it could have packed a bit more punch.