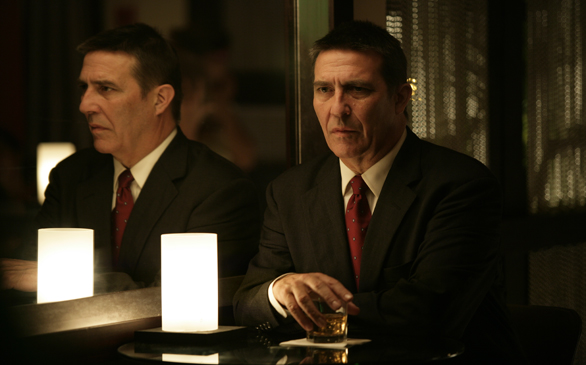 Life During Wartime is Todd Solondz’s semi-sequel to 1998’s Happiness, the latter being a pitch-black meditation on private miseries and the former an insightful look at how people try to reconcile misery through consolation and, most importantly, forgiveness.

It is a semi-sequel – you do not have to see Happiness to understand Life During Wartime – and your enjoyment of this new film shouldn’t be predicated on whether or not you love or loathe Happiness, itself a notoriously harsh look at private depravities and emotional desperation. Solondz even goes as far as to recast every role with a new actor, so the characters remain the same, but the emotional territory being explored here is different.

The narrative concerns itself with the extremely dysfunctional Jordan family, particularly three sisters, each role played with perfection by Shirley Henderson, Ally Sheedy and Allison Janney. Each woman deals with the vagaries of love. Henderson’s character, Joy, is emotionally giving but sexually frigid – a trait that may have indirectly caused the suicide of her former lover. Sheedy plays Helen, a seething intellectual whose inner bitterness leads to vacuous relationships. Lastly, Janney plays the role of Trish, a single mother whose ex-husband is a convicted pedophile, a fact that she hides from her youngest children by telling them that he is dead, when in fact, he has just been released from prison.

Ciarán Hinds performance as Bill, the pedophile, is a real tour de force. With limited screen time and dialogue, Hinds delivers a blistering portrait of a man looking for forgiveness for seemingly unforgivable acts. His maturity and masculinity belies the desperation and sadness of a man that must come to terms with the fact that he is a monster. He fears that his oldest son may be like him, and their confrontation is one of many remarkable scenes in Solondz’s film.

The dark comedy prevalent in Solondz’s earlier work is on full display here. Paul Reubens and Michael Kenneth Williams really shine in their roles as two of Joy’s ill-fated lovers, doomed to return as pandering specters. Charlotte Rampling’s scene with Ciarán Hinds is withering in its self-deprecation, and their moments together reach a perfection rarely found in modern American cinema, the kind of revelatory moments that awards are made for.