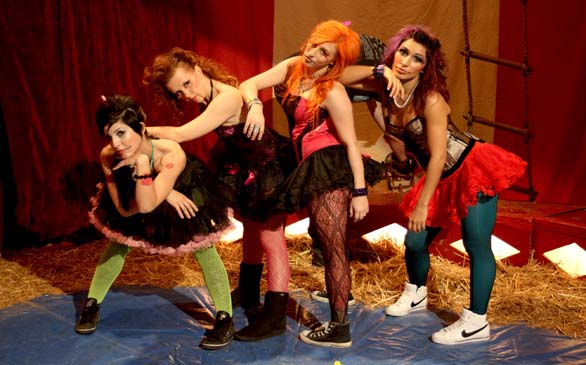 Olga Kay's "Circus" is one of the many programs being screened at this year's ITVFest.
(Credit: ITVFest)

Calling all aspiring TV producers, writers, filmmakers and television enthusiasts! Do you ever wonder what it takes to actually produce a television show? Or are you interested in what goes on behind the scenes in production? If you are a television buff with your finger on the pulse of the Internet for innovative and eccentric new shows, then ITVFest is not to be missed.

The Fifth Annual Independent Television Festival is the perfect place to get your questions answered by the industry’s hardest-working crew, actors, writers, animators and directors. The ITVFest is the nation’s leading festival for independently produced television pilots and Webisodes. The festival debuts independent projects, pilots Web series and mobile content from across the globe. It is open to the general public to see these creative works before most of the bigwigs in the industry have the opportunity. The festival also has daily themed panels featuring television and Web industry leaders focusing on casting, writing, development, pitching, representation, multi-platform programming, international formats, Web distribution and the transition from Web to television. The ITVFest screens a plethora of content for those with varying tastes. “Octane Pistols of Fury” deals with a boss searching for a package, which turns out to be a porcelain cat that has come up missing in transit. The boss sends two of his lackeys to find this missing parcel and one can only imagine what daunting tasks come up while searching.

“Going to Pot” is a pilot about a Colorado medicinal marijuana clinic that deals with its own ups and downs as well as the life trials of their ailing, cancer-stricken and HIV-positive customers. This particular dispensary boasts the tag line, “There is no ‘I’ in team. There is a ‘we’ in weed.”

“Twenty Six Miles” tells the story of a successful businessman and divorced father of two who is thrown for a loop when his wife attempts to move their family out of Los Angeles to Catalina Island. He must now travel to this tiny island community, but once there, he meets up with his friend and former rhythm guitarist who convinces him they should get the band back together for a comeback.

“15 Minutes” deals with the hectic life of Hollywood publicists along with their daily trials and tribulations dealing with celebrity clients. “Duncan and Me” is so not your typical man and his best friend situation like in “Lassie” or Old Yeller. Duncan is a dachshund with a voice that does not mind giving his owner an idea of what he is thinking. The misadventures that might come of a talking dog are plenty. ”The Super Man” is about the wacky and zany experiences of Mikey, a Los Angeles thirty-unit apartment super and actor. He must deal with the crazy and sometimes hectic lives of those living under his roof. One animated pilot worth mentioning is “Four Angry Men,” which deals with a quartet of the least likely crime fighters. “Choir Boys Motorcycle Club” is a pilot about those in law enforcement who have an affinity for riding Harley-Davidson motorcycles and crime fighting.

“Souvenirs” is a short about two UK roommates, Bookmark and Denzil, who have a penchant for shoplifting and cross-dressing. Finally, “Deal O’Neal” is about a young man who has just graduated from college and returns home. Upon his arrival he is congratulated but also thrown for a loop when his parents tell him he is financially cut off and must make ends meet on his own. Illeana Douglas will be honored with the ITV Fest’s 2010 “Innovator Award” at the Opening Night Red Carpet Gala July 29.