Still Climbing: John Travolta Keeps His Head to the Sky in Ladder 49 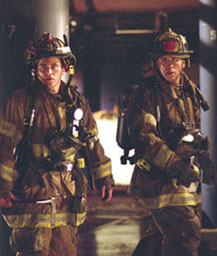 The list of characters John Travolta has portrayed onscreen is as large in size as it is wide in scope. He’s portrayed loveable lugs and a handful of heavies – from Vinnie Barbarino ("Welcome Back, Kotter") to Vincent Vega (Pulp Fiction) – to bring audiences a broad spectrum of roles over the decades. This fall, the actor returns to the big screen with the dramatic action film, Ladder 49, which will surely add yet another notch to Travolta’s ever-expanding body of work.

"Well, lately I’ve been playing a lot of bad guys, so that was entertaining for me," Travolta says with a laugh, going on to reveal his selection process for the characters he’s chosen to play throughout the years. "It’s always refreshing to play a good guy, for sure. But the one through-line would be, what could I contribute to it? Could I do something that another actor might not be able to do? And if I really feel that, then I know I’m in good shape with executing that part."

Ladder 49, from director Jay Russell (My Dog Skip), follows the life of Jack Morrison (Joaquin Phoenix), a young firefighter who’s forced to take stock of his life’s decisions as well as the adventure and drama that come with his chosen profession. In preparation for the film, in which Travolta plays Chief Mike Kennedy, many in the cast of Ladder 49 had to earn their keep by getting hands-on experience, training for over a month with the real Baltimore Fire Department.

"We had enough training to learn our hats (firefighting positions). I had to learn every hat because I was the chief, so I had to taste all of it – a smorgasbord of the training." Travolta recollects about learning how to do everything from driving a fire truck to rappelling off the side of a building.

And while Travolta’s onscreen character, Kennedy, is somewhat of a father figure to the men in his firehouse, the actor says that this buddy aesthetic filtered in behind the scenes as well.

"[Ladder 49] is probably the film that’s had the most camaraderie [on set]," says Travolta. "Although, Urban Cowboy had a lot of camaraderie, too. But this is more specific because [we were working with] people putting their lives on the line all the time."

Travolta literally elevated his "leader" role outside of work as well, by taking some of the cast and crew for a spin in one of his private jets. At one point during the filming of Ladder 49, Travolta, a licensed pilot, shuttled some cast members from Baltimore to L.A. for a weekend to spend some time with their respective families.

"I flew all of the crew around," explains the actor. "I think I earned that trust with this group. Because I’m the captain of this group in the fire station, off-screen I became a captain flying them around the country. I love experiencing that sort of thing."

While Travolta admits that he’s "always had his head to the sky" and admired ladder-climbing lifesavers since he was a child, the actor maintains that Ladder 49 is not an homage to any specific group of firefighters.

"I think it’s an homage to all firefighters. They don’t want to be looked at as heroes – they are heroes; they can’t help it," says Travolta. "And that’s just beautiful about them because most modest people that are hard-working tend to not want the attention [for what they do]. They just don’t want the attention and yet, finally, they have to get it because they deserve it."

Travolta concludes, "If there’s a key message [in this film], it would be along the lines of, ‘Wouldn’t it be great to be more like these guys?’"