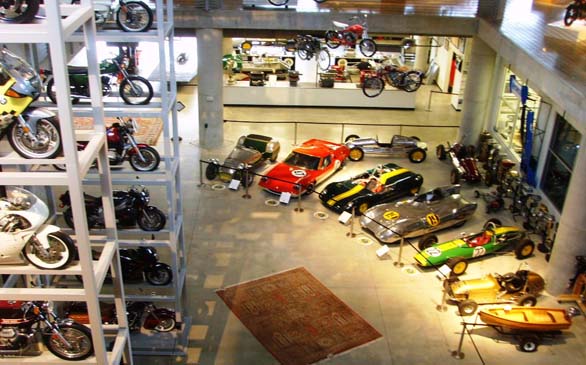 Magic City! That’s the nickname that Birmingham, Ala., earned well over 100 years ago thanks to a phenomenal growth spurt that made it seem like new homes, businesses and industries sprang up overnight, as if by magic.

One day, when people are zooming around Birmingham with jetpacks strapped to their backs, people will think that’s magic, too. Until that time comes, you have to settle for arriving at these Birmingham-area transportation museums in a more mundane manner. What you see there, though, just might put you over the moon.

The Heart of Dixie Railroad Museum (hodrrm.org): This museum celebrates the golden age of railroading and is the official railroad museum for the state of Alabama. Displays in this restored depot include train whistles and bells, railroad crossing lights, spikes and equipment used to lay tracks and hundreds of other artifacts and pieces of memorabilia. Outside in the train yard, you can see dozens of vintage diesel and steam locomotives – some of which still run. Admission to the museum is free, but a nominal charge applies if you want to ride the narrow-gauge steam locomotive or take a longer journey on the Calera & Shelby line pulled by a powerful diesel engine. Want a real thrill? For $30 you can ride along in the locomotive (engine car) itself.

Southern Museum of Flight/Alabama Aviation Hall of Fame (southernmuseumofflight.org): The flying machines housed here include a nearly 100-year-old fabric-covered biplane used as a crop duster, Korean War-era jets and helicopters from the Vietnam War. Alabama’s famed Tuskegee Airmen are saluted here with a multiple-plane diorama that includes life-size mannequins placed in, on and around the World War II trainers. The wreckage of the “Lake Murray B-52,” a WWII-era bomber recovered from the depths of South Carolina’s Lake Murray in 2005 is also here in all its rusted glory. Soviet-made MiGs, experimental civilian aircraft, a Wright Flyer and a Blackbird spy plane are among the 75 planes on display here. Some displays are hands-on; climb right into a real cockpit or try your hand at flying in a flight simulator. Admission is $5 or $7 if you want to go through with a tour guide.

Barber Vintage Motorsports Museum (barbermuseum.org): It’s pretty safe to say you’ve never seen anything like this place. The Barber Vintage Motorsports Museum is home to over 1,200 vintage and modern motorcycles and the largest collection of Lotus racecars in the world. Plan on spending some serious time here to see everything; it takes five floors and 144,000 square feet to house all the crotch rockets and speedsters. The displays are quite creative, too; you’ll see “trees” of motorcycles that span several stories and rack after rack of bikes that stretch to the ceiling. The basement of the Barber Museum houses a restoration center, and there’s a viewing area where you can watch them work on pieces like a 1949 Imme R100. Not everything here is vintage, though. Check out the 2006 Ducati Desmosedici. Only 1,500 of these exist, and motorcycle enthusiast Tom Cruise owns the first one that rolled out of the Ducati factory. The museum is adjacent to Barber Motorsports Park where motorcycle races and other special events are held throughout the year. Admission to the museum is $15.

These three Birmingham attractions are close enough together that you can squeeze them all into one day if you choose.