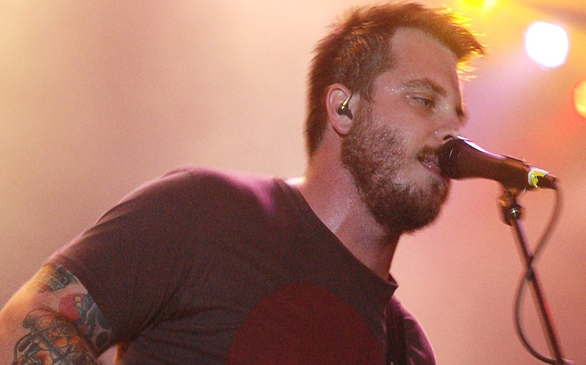 One might easily come to the conclusion that SoCal is a bit spoiled by the fact we get more Thrice shows than anywhere else in the country due to the foursome being from our own back yard. Real talk: we kind of are.

If there was one thing the band’s fans showed this time though, it’s that said familiarity isn’t taken for granted. Once the foursome took stage, they proved why they’re one of the great treasures of our lower half of the state, kicking off their set with “All the World is Mad” from their latest album, Beggars.

Rocketing through older rarities “To Awake and Avenge the Dead” and “Blood Clots and Black Holes,” the band’s set felt slightly dominated by heavy-hitter tracks, leaning toward the thrash-worthy jams from their oeuvre. While the band can do concussive rock like nobody’s business, a big part of what differentiates them from their contemporaries is Dustin Kensrue’s emotive vocals, which can be downright heart wrenching.

But then, when playing to a crowd chanting for an encore with “Deadbolt,” the emotional subtleties of Kensrue’s vocals might have been the proverbial pearls before swine anyway. Extra points to anyone who gets the accompanying irony of them not playing “Stare at the Sun” in this setlist.

Given how long this band has been playing shows, how extensive their catalog of songs is and how deserving of respect they are in general, however, it’s only fair to afford them some freedom to stray from the regular setlist protocol. Just as long as they keep playing shows for us, that is.