As I Lay Dying: Living for Their Craft 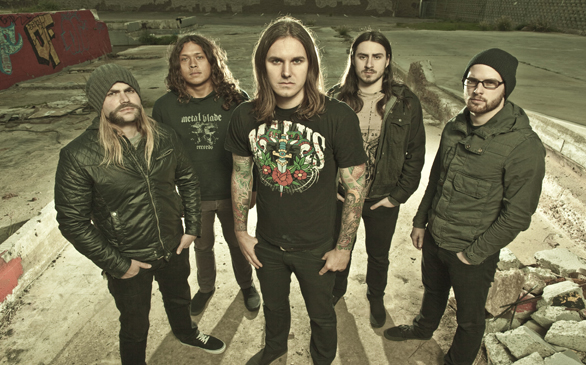 They’ve headlined Warped to Ozzfest, and every hard rock festival stage in between while jet setting about on their own headlining tours. Suffice to say, San Diego-bred metalheads As I Lay Dying have logged the miles for serious cred by now. With five albums under the band’s collective belt – the last three containing the current core band roster – As I Lay Dying have effectively staked their claim as the leaders of the metalcore pack with their latest effort, The Powerless Rise.

Though, for the record, they appreciate some healthy competition in their genre.

“All these bands coming out help keep us on our toes, striving to be the best,” says guitarist Phil Sgrosso. “We knew we really needed to push ourselves if we wanted to survive in the metal world.”

Much to the band’s credit, Sgrosso, bassist Josh Gilbert, fellow guitarist Nick Hipa, vocalist Tim Lambesis and drummer Jordan Mancino deliver on that claim with Rise, with the album’s melodic parts more evocative than ever while still turning the thrash up to the proverbial 11.

As heard on the album’s lead single, “Parallels,” the fivesome might have just found the secret to bridging both ends of the rock spectrum.

“‘Anodyne Sea’ is my favorite song on the album. I think it’s my favorite song that we’ve ever done,” says Sgrosso. “I wrote that in the second writing session that we did, and it was good because it came out of wanting to add new elements to the record that we didn’t have yet. That song kind of surprised me when it was done. It’s less than three minutes long, but it’s got a lot of aggression, and it’s one of the grittiest songs I think we’ve ever done. Back in the day I used to listen to bands like At the Gates and In Flames, those bands that are staples of what fast, aggressive, melodic metal is all about. I don’t listen to those bands as much anymore, but the influence is still there and helped create the guitar player I am today.”

While Sgrosso may come from harder roots, that’s certainly not to say there aren’t a few surprises in his musical background.

“I always separate influence from inspiration. My favorite guitar player is David Gilmour and listening to how he plays guitar, he makes it speak, creating an emotional reaction. But obviously my guitar playing doesn’t sound like David Gilmour,” he says with a laugh. “But there’s always stuff to take away in wanting to be a better guitar player.”

Spend any amount of time with the members of As I Lay Dying and it’s clear that the work ethic Sgrosso has toward being a guitarist is one shared by the rest of his band mates toward their respective instruments. Which is why things can get a little complicated when the band has to make setlists for tours these days. Everyone has their favorites. Sgrosso included.

“It’s kind of tough, we disagree as a band sometimes. A lot of the songs we make videos for are the ones that will always be a staple of the setlist. You do videos for the songs you feel are the best and that will come off best live,” he says.

And this is before any of the band’s diehard fans get to throw their own two cents in.

“You can’t satisfy everyone. Kids are always like, ‘Play this song off your first record!’ But we played that for four years,” he jokes. “It’s time we moved on and got new things going. There’s nostalgic value on a lot of the older songs. I understand that. But there are so many newer songs we want to start playing. And as long as you’re growing with a band, you’ll understand.”

Luckily, over their time together, the band has gained the interpersonal skills to match their instrumental ones, making the hard decisions significantly easier to manage these days.

“Communication was difficult in the earlier years, with most of our members coming from different backgrounds and not really growing up together. When you first meet someone, you’re like, ‘This dude’s got such a cool personality,’ but after a few years of living with them like a roommate, you realize there are flaws,” Sgrosso says. “As long as you have good communication with each other and respect for each other, you can solve any conflicts. It’s just knowing how to treat someone and knowing how you should be treated as well.”

As I Lay Dying perform July 31 at the Palladium. For more information, visit asilaydying.com.