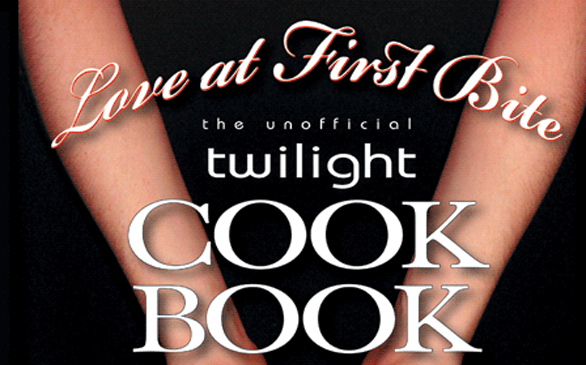 At one point in my life, I was totally a self-proclaimed Twihard. Although in the years since Breaking Dawn was released (and indeed because Breaking Dawn was just so disappointing as a series ender in my opinion), my obsession has cooled, I’m still curious about the films, and I’ll occasionally indulge in a little Twilight-related fun.

And since I love food, I was totally excited to see Love at First Bite: The Unofficial Twilight Cook Book by Gina Meyers, featuring recipes for some of the dishes cooked in the novels. Now, I may not love Twilight like I used to, but even the most dedicated Twilingual out there should be insulted at the recipes Meyers offers up.

I mean, seriously, sure Bella makes grilled cheese in the novels, but who doesn’t know how to make it at home? Jacob Black’s Grilled Cheese Sandwich is definitely nothing fancy. In fact, pretty much every recipe is as straightforward as they come, with the only creativity on Meyers’ part coming in the form of recipe titles. Even the Forkshatten cocktail is a classic Manhattan formula.

So while the book initially got points for combining two of my favorite things (complete with a [disappointing] trivia section and movie notes), in the end, it feels more like a desperate, half-hearted attempt to ride the coattails of Twilight.