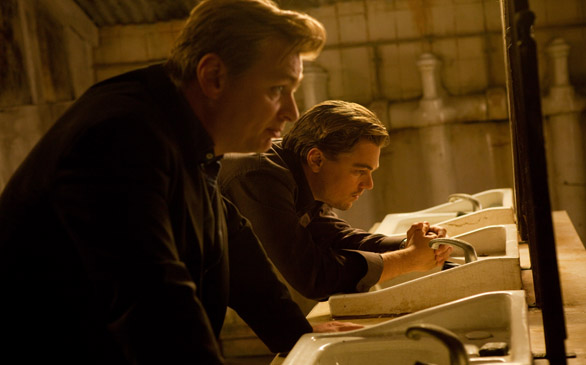 Christopher Nolan is my generation’s Stanley Kubrick. It was this thought that was at the forefront of my mind as I was coming out of the IMAX theater after seeing Inception recently.

It feels like Nolan is the natural evolution of the possibilities opened by Kubrick. While Nolan and Kubrick each occupied different eras of filmmaking that had different audiences, they are similar in the sense that they both created extremely original works of art that worked on a mainstream level.

A majority of films that are released in America are product, plain and simple. Disposable, cookie cutter, sugar coated, happy meal product. Films designed to be product strictly for the purposes of making money are not a new thing, but there have always been films that were full of craft and originality to balance it out. When you look at a film like 2001: A Space Odyssey, Full Metal Jacket or A Clockwork Orange, you’re watching films that were made by a filmmaker who isn’t interested in just cranking something out so people can kill two hours watching it. Kubrick is one of those filmmakers whose works exude craft. His films are deep, dense and intelligent. He’s not interested in being safe; he’s interested in the limitless possibilities of the magic of cinema.

But while Kubrick’s films pushed the envelope creatively, they were also commercial films (for that time period). And that’s exactly why Nolan has begun to remind me of him. With works like Memento, The Prestige, The Dark Knight and Inception, Nolan is creating extremely intelligent, deep, original and highly creative film, and at the same time, they are wildly entertaining commercial films.

Obviously, film is still a business, and in order to stay in this business the films have to make money. Nolan’s pictures make money. When a filmmaker makes a film that makes as much money as The Dark Knight did, they get a no-limit credit card for their next movie. It’s right after a director celebrates a huge success that he can push through an ambitious original project that most likely wouldn’t get made without that boost of credibility that a record-breaking hit can provide.

It’s what I like to call “high art,” which to me is defined as a really expensive piece of art. Movies are a business, and money must be made. But every now and then when a filmmaker gets into a position to use his clout to get an expensive project made the way he wants, you get something truly magical.

Say what you want about American audiences not being smart, but the fact that everyone is raving about Inception proves that there is a demand for smart programming. It’s filmmakers like Stanley Kubrick and Christopher Nolan who remind us that film is not just a tool of capitalism designed to be consumed and disposed of like fast food, but a real genuine art form with limitless possibilities. Inception is hands down the film of the year