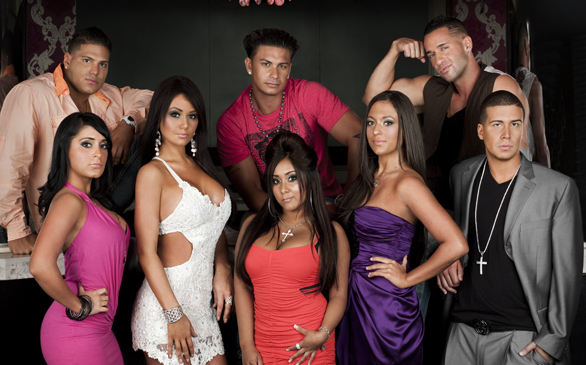 Get ready because the wait is finally over. This summer your favorite group of hell-raising, party crashing guidos and guidettes return to the small screen for the highly anticipated second season of MTV’s breakout hit show “Jersey Shore.” But can you handle the crazy?

If somehow you’ve been sleeping under a rock for the past nine months, “Jersey Shore” is the addictive, “Real World”-type reality experience capturing the lives of eight wild Italian-American housemates, set in New Jersey, of course.

With 12 new episodes ready for America to indulge in, the real party is about to begin. Catapulting off of the show’s overnight success, MTV has found the perfect blend of sexy and sweet with our latest guilty pleasure. Take the show’s resident good-girl Snooki for example. When she isn’t causing a stir out in public, she’s usually gabbing about her biggest obsession: pickles. In season 2, Snooki has a life-changing experience tasting her first fried pickle – quality American television at its finest.

For those of you who have not yet caught a glimpse of the show, the cast delivers a strong dose of must-watch wildness and hilarity in each and every episode. Soaking in their newfound celebrity statuses, this time Snooki, Mike “The Situation” Sorrentino, Pauly D, JWOWW and the rest of the gang ditch Seaside Heights for one hot destination where the city never sleeps and the party never stops: South Beach, Miami.

Though a bit shocking at first, the change of scenery is sure to bring a whole new season of surprises, drama, hook-ups and, of course, parties. After all, the cast of misbehaving ladies and gents did outstay its welcome a bit during their adventurous summer in New Jersey in the show’s season debut. Remember when that drunk guy punched Snooki in the face at the bar? Or when Pauly D’s crazy stalker followed him all over the boardwalk? Maybe when Ronnie and Sammi finally stopped fighting? You can’t forget when JWOWW was thrown out of the club during a night out, and the boys decided not to save her. Well, this summer, the lip locking, dance-floor grinding and fist pumping are all in full effect.

In the trailer for the new season, MTV teases audiences with tons of on-camera moments that can’t be missed. We all remember when audiences collectively cringed last season when the Situation and Snooki had lapses of judgment in the hot tub that one night. Well, prepare for a few more housemate hook-ups. Vinny will take his turn going after Snooki, only to spark a brawl between her and Angelina (you know, the girl that got fired and evicted last season). The newly extinguished flame between Ronnie and Sammi will definitely make for an awkward living situation, especially when JWOWW tries to move in on freshly unmarked territory. Big fan of catfights? Well, the new season promises at least a couple.

MTV also gets it right with the second season’s tagline, “New Shore, Same Crazy.” Witness the playboy antics when the Situation and his buddies go fearlessly into battle and fight off grenades (the term given to the less attractive friends of a girl that is being pursued). Amid their summer nights ab flaunting and party hopping, the housemates definitely haven’t lost the crazy.

Taking it up a notch, the cast guarantees fans more fun this summer. Always flaunting her signature hair poof, Snooki tells MTV, “Miami definitely has a lot of good clubs, and so does Jersey … the only thing that’s good about Miami is they’re open till six in the morning. Jersey closes at 2 a.m., so that kind of sucks.”

An endless opportunity to go out for this bunch? Sounds like trouble. In the second half of season 2, the group relocates back to the one and only place they call home, the Jersey Shore.

Albeit outlandish ratings and phenomenal popularity, last summer “Jersey Shore” skyrocketed to success by stealing headlines for the equally entertaining controversy and protest surrounding the show. Whether it was for the criticism that blamed the show for its offensive portrayals of Italian-American stereotypes or the vicious scrutiny from the locals who argued the non-local cast members misrepresented the area, the tabloid talk encouraged even greater interest in the experimental project that the music network had created. For MTV as well as the young stars, the results have been laced in nothing but dollar signs.

As dissenters pushed for MTV to pull the program off the air, the channel responded with a short and sweet explanation: “The Italian-American cast takes pride in their ethnicity. We understand that this show is not intended for every audience and depicts just one aspect of youth culture.”

Almost a year later, the show survived, becoming an instant TV favorite. Also in less than a year, the cast has also risen to new ranks in the Hollywood hierarchy.

On season 2’s star-studded soundtrack – featuring high-profile artists like Lil Jon, Enrique Iglesias, Ludacris, Pitbull and LMFAO, who sings the show’s opener “Get Crazy” – cast mate-turned-overnight-celebrity DJ Pauly D is also featured with his brand-new single. As for the type of music, you guessed it: club track.

So what’s there to expect in season 2? The Situation boasts to MTV News, “You know what, this [new] season is crazy. It’s action-packed. It’s like a movie. It’s gonna be one of the best shows of the year, guaranteed.”

And even though the new season has yet to kick off, all of the cast members (except Angelina “Jolie” Pivarnick) recently signed on for the show’s third installment. Given “Jersey Shore”’s catastrophic following, each walked away with a significant pay rise, sure to be spent on tight dresses, gym memberships and, of course, pickles.

So, get ready. Expect the beach bodies to be more ripped, the skin to be a hint more orange, the fights more fantastic and the parties to never end. Cake on the fake tan and prepare to fist pump your way through summer.