Memento: Three Aussies and a Guy from Silver Lake 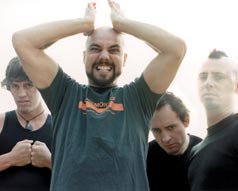 Justin Cotta, lead singer for the new Columbia Records band Memento, is explaining the meaning behind the lyrics for the song "Beginnings." References to nails, thorns and turning the other cheek give the tune a decidedly Biblical tone. Combined with Cotta’s delivery, that of stunned disbelief at how things are, can only mean he’s irked with the heavens. But he claims that the song was born of earthly frustration. "On a broad level, it’s about almost any male friend I’ve had, any father figure I’ve had, which has been a couple. My mum’s had a couple marriages, and I’ve lived with my grandparents, so there’s been four or five guys I kind of looked up to. You look up to them to be that anchor in your life, but except for rare instances, they’ve had a really difficult time expressing themselves. Apart from being absolutely shitfaced on three cartons of beer, and talking trash——that’s fine. Specifically it is about Dad, and Granddad, but I’m not sitting here penning those lyrics to God. It just felt like a very appropriate metaphor." Cotta’s ability to convey feelings in song make Memento’s debut, also called Beginnings, seem like a personal note to the listener.

After completing a tour with Papa Roach, Memento is currently rocking clubs nightly with CKY. Cotta says that the band quickly erased his trepidation about sharing a bill. "We’d heard all kinds of horror stories, but they’ve turned out to be just top guys. I’ll probably get killed for saying this, but the thing that surprised me is how amazing they are on stage as players. It’s not a circus act; it’s a real band, and that’s totally cool." The crowds have been equally pleased with Memento’s sets. Cotta shares the stage with his former band mate from Vast: drummer Steve Clark, and fellow Aussies Space (guitar) and Lats (bass.) And although they’re not being heard on this tour, piano and strings are a part of the Memento sound as well. Cotta is a classically trained pianist and looks forward to the luxury of being able to add keys to the live show. "I haven’t even broken out my guitar yet!" he says.

When Memento took to the studio to record Beginnings, they brought a couple of heavy hitters with them: producers Toby Wright (Korn, Alice In Chains) and Brendan O’Brien (Pearl Jam, Red Hot Chili Peppers.) "My first image of Toby was this 6’2" giant with a shaved head walking into our rehearsal room. Mental note to self: don’t disagree with that guy!" Cotta laughs. But the band didn’t have to tie Wright up and stake him to the studio floor. "He was kind enough to let us fight. It ended up with things being better than what they were before the argument. We’d listen back, and if he was right, we’d do his idea. He could’ve pulled rank and said, ‘I’ve done this and this and this; you’re three Australians and some dude from Silver Lake,’ but he didn’t. He was totally cool." Memento will join the party at Ozzfest on the second stage this summer.