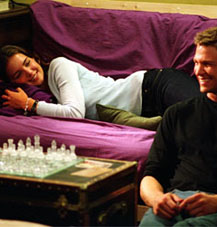 When the mediocre Mandy Moore vehicle Chasing Liberty was released in theaters earlier this year, part of the gossip circling around the film’s release was that another project with a very similar storyline was lurking just around the bend. When Liberty, from director Andy Cadiff, beat Forest Whitaker’s First Daughter to theaters, the people behind the latter project said that, while the films may seem similar, First Daughter would be a far superior film.

It’s now early fall and First Daughter – starring "Dawson’s Creek" alum Katie Holmes in the title role – has failed to live up to its positive campaign. The film, which opened Sept. 24, is not really better than Chasing Liberty, and not really worse. While some of the costumes are fun to look at – including two of Holmes’s gorgeous custom-made Vera Wang gowns – and the two leads (the other being "Buffy’s" Marc Blucas) have some decent onscreen chemistry, First Daughter isn’t a superior film. It’s not even that smart of a romantic comedy. Instead, it’s just a ho-hum piece of shallow fluff with a farfetched storyline, and a plot that doesn’t allow the characters enough time to develop a believable relationship.

In the film, first daughter Samantha Mackenzie (Holmes) is 18 years old and college-bound. She’s lived her entire life in a sheltered bubble, smiling endlessly for interviews and having her every awkward move scrutinized by the press. She knows nothing of normalcy outside her privileged life, so all she really yearns for is a chance to "blend in" and be appreciated for who she is. And although she arrives at fictional Redmond University via presidential motorcade and an entourage of secret service agents, her simple dream of fitting in takes shape in the form of handsome coed James (Marc Blucas), who ends up falling head over heels for the "real" Samantha. Things come to a halt, though, when Sam – much to her dismay – realizes that James is really an undercover secret service agent under her father’s employ.

Even though it lacks in development and originality, First Daughter is a smart starring vehicle for Holmes, who will be able to carry the strong "Dawson’s" following into theaters with this film. Even so, Whitaker – who also helmed Hope Floats and Waiting to Exhale – should have held out for something a bit less flat and tired.