Children of a Broken Home 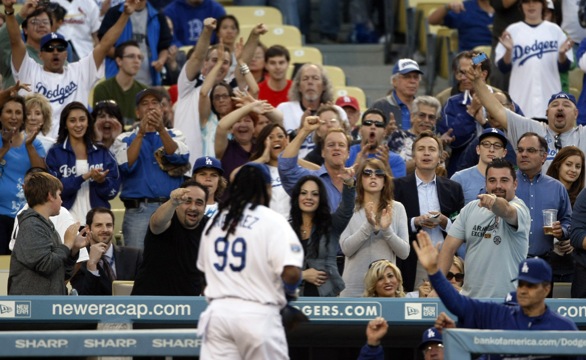 Joe Torre was clearly dejected after Saturday’s 2-1 loss to the San Francisco Giants. For both teams, the game seemed to encapsulate the current state of affairs. The Giants are smokin’ hot, winning 20 of their last 25 games. The Dodgers, meanwhile, are limping along with a record of 5-11 since the All-Star break. Again the offense had been all but absent. They have scored a paltry 15 runs in their previous nine games. One could barely make out the twinkle of liquid in Torre’s eyes as he discussed the team’s recent failings.

“We’ve had a number of tough losses in a row, and it starts to weigh on you,” he said. It is a weight that can be felt in the post-game clubhouse after each successive loss, in the sighs and low mumblings of the ballplayers.

It is tempting to explain the Dodgers poor performance of late as a result of the McCourt divorce proceedings, which officially begin this month. The subject of much news coverage, the conventional wisdom is that the ownership is lacking in funds and can, therefore, not afford to patch up the weak spots in the team like other big-market clubs can.

The suggestion is that enough money will buy victories. And yet the Dodgers of this season are not so fundamentally different than the team that won two consecutive division titles. It is true that the absence of Manny Ramirez (hung up on injuries to his left leg, first the hamstring, now the calf) has changed the face of the lineup. But last year the team did fine without Ramirez during his suspension.

There is something else lacking this season; something less tangible, a certain gusto, a swagger, a wide-eyed sense of possibility that the players brought to the field every day last year. Since the news of the divorce hit the stands, there has been a sense that the happy days of the Dodger renaissance are over. And you begin to wonder if that has affected the team in ways valued beyond dollars and cents. For whatever one thinks about the McCourts, the couple certainly projected an air of confidence in their heyday that was infectious.

It is a fanciful theory that suggests big league ballplayers are affected by the emotional dramas of team owners, and yet it does suggest an interesting alternative narrative: the Dodgers as children of a broken home. If anything, it offers a compelling story of a family trying to get through tough times. To paraphrase Leo Tolstoy, “All happy families are a bore.” There is curiosity, dynamism, mystery in this view of a team so down on their luck: eight games behind the first-place Padres through Aug. 1.

“I know we’re better than this,” offered Torre after the final loss of a three-game sweep at the hands of the Giants, “and I know it’s gonna turnaround. It’s just a matter of when.”

Torre’s confidence in the team may be their saving grace. In his 50 years of playing, he has seen plenty worse. He’s also seen this club in their glory. The team would be wise to recall what they are capable of, to search deep for wellsprings of baseball power.

Other encouraging news is that Manny Ramirez will be rejoining the team from his rehab assignment in Arizona Aug. 4. The reports on Ramirez from trainer Stan Conte have been optimistic. The hope and expectation is that his presence will revive an anemic offense.

The Dodger family also got a few new additions in the likes of lefty starter Ted Lilly and second baseman Ryan Theriot from the Chicago Cubs for Blake DeWitt and $2.5 million. They also got reliever Octavio Dotel for James McDonald. Some family that trades its young!

“It’s the nature of the business,” says Torre. “It’s the price we needed to pay.”