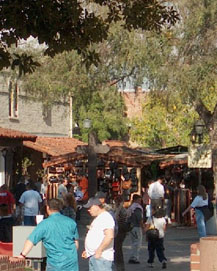 If you happened to grow up in L.A. you probably remember trekking to Olvera Street as a kid, a field trip staple for local elementary schools. Wandering through those little puzzling passageways under a whirlwind of colorful curiosities made this one of the more memorable field trips (besides being able to take home a box of Mexican jumping beans). La Placita Olvera, as it is known in Spanish, is a Mexican marketplace that was officially set up in 1930 in order to restore and commemorate the oldest part of the city.

Olvera Street is closed to traffic and laid out around a friendly pedestrian promenade, with plenty of restaurants, shops and vendors selling authentic Mexican goods. Items for sale range from cheap plastic toys to genuine hand tooled leather goods, and hand painted pottery to colorful souvenirs, like maracas and ponchos.

There are also puestos, or individual vendors, selling traditional Mexican candies and baked goods. And when it’s time for a real meal, the choices encompass the informal taco stand to the fine, sit-down restaurant, such as La Golondrina, all with tasty, standard Mexican cuisine.

This Mexican marketplace is more than a mere tourist attraction or promenade with shops. It marks the earliest beginnings of the City of Angels with the El Pueblo Historical Monument. Spanish settlers, arriving north from Baja California, founded Los Angeles at this very site more than two centuries ago. However, the name Olvera Street wasn’t adopted until 1877, in honor of the first L.A. county judge.

There are many historical buildings and markers residing in Olvera Street, such as the Avila Adobe – the first house in Los Angeles, which housed the mayor Francisco Avila and his family – in 1818. The now restored Avila house is open daily for tours. You can also visit the first church in Los Angeles, known as the Mission Nuestra Senora Reina, which still conducts daily Catholic mass.

You can always forego the history and simply watch the Mariachi band and the American Indian dancers, both of which perform right on the promenade on weekends. For kids – and here’s another "city first" – a visit to L.A.’s Firehouse No.1, located across from the main entrance to Olvera Street, should keep them entertained. Olvera Street and most of its historic attractions are open daily from 10 a.m. until 7 p.m. Entrance to the promenade is free, with metered parking on the street.