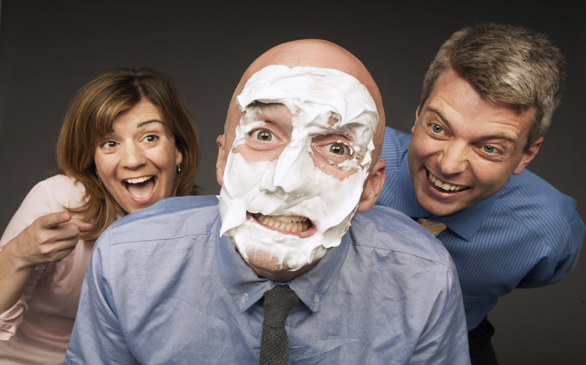 On the night of the Groundling’s “River Adventure” show, the theater’s lobby is decorated with giant posters of Los Angeles’ rivers. Scenic is not a word one would use to describe our rivers – polluted, over glorified sewers, maybe, but not scenic. That irony plays out in the 22 written and improvised scenes that make up the show, creating the sort of offbeat take on culture that has made the Groundlings such a powerhouse.

The show starts off with a scene including all eight actors about a birthday surprise turned allergic-reaction disaster. In “Cream” a man, played by Jim Rash (best known for his roles on “Reno 911!,” “Community” and “The Naked Truth”) is presented with a cream pie on his birthday by two co-workers. When they pie him in the face though, the joke is on them: Rash is deathly allergic to cream. Suddenly the race is on to find his medication, with voice-over internal monologues there to lead the way.

All of the skits were written by cast members: Scott Beehner (Tomcats, Sweet and Lowdown), Ryan Gaul (“10 Items or Less”), Stephanie Courtney (Blades of Glory, For Your Consideration), David Hoffman (who makes up for his lack of screen credits with being one of the more prominent writers and performers), Taran Killam (My Best Friend’s Girl, Stuck in the Suburbs), Jim Rash, Lisa Schurga (“Leverage,” Sketchpad) and Annie Sertich (“The Office”).

Comedy
Impractical Jokers aka The Tenderloins, Serving Comedy Up "Well Done": Live at The Grove of Anaheim (1/17)
3,894 views