Clash of the Titans, Kick-Ass and More 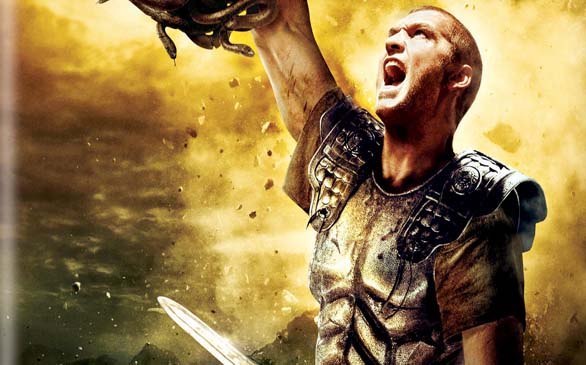 The Majors: An all-star cast headlines the update of Clash of the Titans, a CGI-filled action-fantasy inspired by Greek myth. The mortal son of Zeus (Sam Worthington) is on a mission to save the world from the forces of the Underworld. Liam Neeson and Ralph Fiennes co-star.

If you can divorce the director from the personal controversy, you’re sure to dig Roman Polanski’s The Ghost Writer, a solid conspiracy thriller based on Robert Harris’ novel. The film follows a ghostwriter (Ewan McGregor) hired to write the memoirs of a former prime minister (Pierce Brosnan). But he soon uncovers secrets that put his life in jeopardy.

Comic Books: Kick-Ass is an irreverent and surprising adaptation of Mark Millar’s graphic novel that puts the fun back in superheroes. A high school nobody decides to become a masked crime fighter, but soon finds himself in over his head against a mob boss. It’s a playful send-up of comic books and a hilarious coming-of-age comedy.

The Idiotbox: Can’t get enough superheroes? Check out the fourth and final season of “Heroes.” Following a total eclipse, a group of individuals from around the world find themselves endowed with superpowers. Now they must decide who will be heroes and who will be villains.

Trauma: Season One (available Aug. 10) takes the medical drama and cranks it to 11, transporting the action to where the real drama is. The series follows first responder paramedics as they helicopter in to devastating crises.

The Vault: Few names are so associated with a genre as Errol Flynn is with adventure. From swashbucklers to war thrillers, Flynn dispatched his foes with singular charm. Errol Flynn Adventures collects five WWII-era thrillers (four by the great Raoul Walsh), co-starring Ronald Reagan, Ann Sheridan and Walter Huston. They include: Desperate Journey, Edge of Darkness, Northern Pursuit, Uncertain Glory and Objective, Burma!

Funny Business: From his fratboy take on W. to Alex Trebek babysitting celebrity numbskulls, Will Ferrell was the funniest thing on “SNL” in the last 15 years. Check out more of his highlights in Saturday Night Live: The Best of Will Ferrell, Volume 3.

Stranger Than Fiction: Go inside the world of “Dungeons & Dragons” fanatics in The Dungeon Masters. The by turns funny and poignant documentary follows three obsessed adults who seek refuge from their mundane lives in the fantasy game.

Foreign Fare: Oscar nominee for Best Foreign Film and winner of the Grand Jury Prize at Cannes, A Prophet is a gritty crime drama. It follows a young convict who is recruited by a prison gang and forced to carry out hits and traffic drugs. Tahar Rahim gives a stellar performance.

The Sporting Life: Follow the Lakers’ road to becoming one of the most successful dynasties in sports history in 2010 NBA Champions. Watch as the team’s 16th championship season culminates with a showdown between one of the great rivalries, Lakers vs. Celtics, with Finals MVP Kobe Bryant nabbing his fifth ring.

Blu Notes: Kevin Costner, Susan Sarandon and Tim Robbins star in the neo-classic minor league baseball comedy Bull Durham. Every season, Sarandon chooses one player from the superstitious team for whom she will serve as a muse and good luck charm. But this summer, she is torn between a dimwitted rookie pitcher and a going-nowhere veteran catcher.