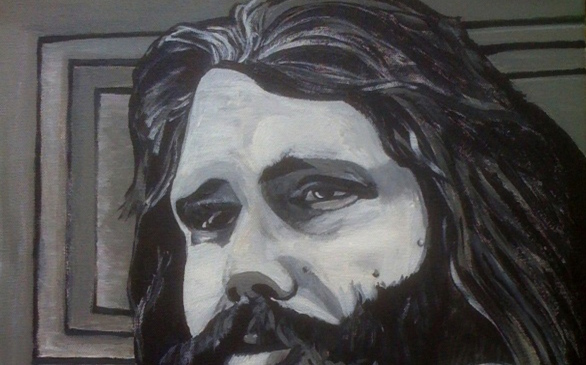 The sprawling city and basin of Los Angeles with its brightly covered hillsides, never-ending valleys and infinite coast helped make Robert Richards the person he is today. Richards is a Santa Monica-born, Pacific Palisades-raised painter who carved a niche for himself in a very different Los Angeles.

Picture an idyllic metropolis without the burdens of a sagging economy or being constantly tethered to electronic devices, and no Internet let alone a computer that performs to present-day high standards. Growing up in a time like this might be hard to imagine for someone in Gen Y or Gen X, but rest assured there was more time to dedicate to what truly inspired you as a person, not the constant hustle and bustle we all experience at times.

Richards was blessed to grow up in a less hectic environment where he grasped an opportunity to express himself artistically as a wee child.

“I started drawing at a very early age,” he says. “I was drawing before I could walk. It was something that my family was sort of surprised at, even in school I was known as the class artist.”Richards has been honing his artistic abilities in fine arts and music most of his life, though he has just begun publicly showing his works in exhibitions for the past two years after leaving the music scene.

“I felt like the time was right to start exhibiting based on the fact that I had been getting a really good response from my paintings,” he states. “I felt that people would like to see what I was doing.”

Robert’s current exhibit is the Rock Rebellion Series at the Hangar Galley at the Santa Monica Airport. The exhibit features Richards’ amazing portraits of legends in the music world like Jim Morrison, Syd Barrett, Bob Marley, the Rolling Stones and Kurt Cobain. Each painting has a very different representation or rendering of the musician, which is true to their own unique talents, hidden flaws or unabashed angst. The portraits of Cobain and Morrison both exude a very dark and foreboding feeling that one cannot shake. In his portrait, Cobain’s furrowed brow gives off the idea he is uneasy about something, while the rest of his face is emotionless and blank. His head is cocked in a different direction, but his eyes seem to be glaring into the viewer, searching, longing to feel more, but his cold blue eyes would never warm. The portrait of Morrison, on the other hand, has the same tinge of wanting to find more of himself and the world around him, but never attaining it. His posture and position are not facing the viewer, but off into the distance, as though there were something on the horizon calling him home. A portrait of the former Pink Floyd singer Barrett is unlike the others in that it does not give off the same emotions that bleed out in Cobain and Morrison’s portraits. Barrett’s portrait draws you in to his dismal state of confusion, giving the viewer a chance to see what this wild card had hidden up his sleeves.

The portrait of the Rolling Stones shows the band together in a brotherhood formation. The years of recording, touring, fighting and being at odds with each other does not compare to the emotions and sense of belonging they all share being on a stage together night after night.

The portrait of Bob Marley is fitting to the persona he showed the world. Marley seems a bit vacant, at a loss for words or in awe, which for most Wailers fans is apropos for the singer.

The centerpiece of the series is Richards’ longtime muse and girlfriend Andrea.

“She really inspires, keeps me wanting to create and wanting to do the best I can,” he says sweetly.

In her portrait, Andrea is seen posed and smiling almost as though this were a photograph, not a painting. She is wearing a sought-after KISS T-shirt with her hair in two ponytails, and she proudly displays a tattoo, proving to the world her reciprocated admiration and love for Richards.