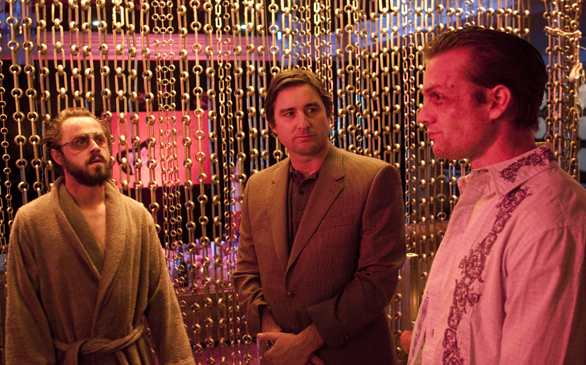 “Just by virtue of the fact that George Gallo is written on the front [of the script], it already has an incredible pedigree,” Ribisi begins one Sunday afternoon at the Four Seasons in Beverly Hills.

Sitting down to discuss the film, his slight frame appears fragile and lithe, and he sports a heavy beard over an impish smile.

Macht, however, wasn’t as immediately certain and had some concerns about what his almost 3-year-old daughter might think of his role. Tall, handsome and wholesome-looking, Middle Men is a family affair for the actor, whose wife, Jacinda Barrett (Bridget Jones: The Edge of Reason, Ladder 49), plays Wilson’s wife in the film.

“For me, that’s sort of the mise-en-scène of it,” Ribisi replies, using the French term meaning, literally, placing on stage or setting. “[Middle Men] is about so much more; America, the American Dream, how these guys go in, achieve [success], almost get bombarded by it and eventually get devoured. It’s a classic epic story about greed and lust, what people will do for money and the underbelly of America.”

“It’s like the Rockefellers or the Hunts or Bill Gates,” Wilson offers. “Where one minute these guys are working in their parents’ garage and the next, they’re billionaires.”

The soft-spoken Texan, looking trim and tan, says he had always envied actors who got the chance to play parts that required intense research in order to portray a real person.

“I always got these scripts, not in a bad way, where it was right on the page,” he shrugs. But in Middle Men, Wilson not only had the chance to bring a real man’s story to life but he had unfettered access to the script’s source since the movie was inspired by producer Christopher Mallick’s experiences during the Internet’s Wild West days in the late 1990s and early 2000s.

“To get to meet the person [I was playing] and spend time around them, I felt so lucky to get to do that. It’s wasn’t like Johnny Depp playing Hunter S. Thompson. Chris wasn’t someone who walked funny or talked funny. He was more of a straightforward businessman, but you could ask him anything and just having him there was great.”

As for Gallo’s credo, Wilson laughs and nods his head.

“That’s how the movie rocks along,” he smiles.