The Extra Man: Paul Dano and Kevin Kline Together Again 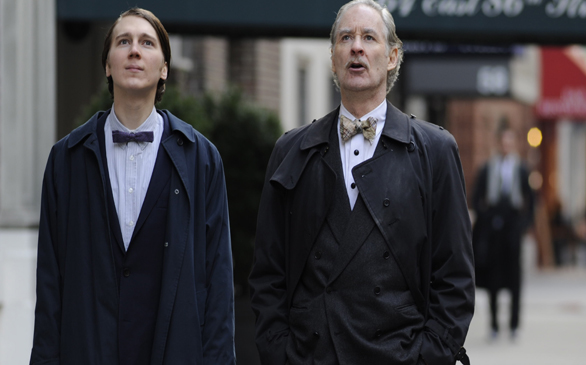 He might very well be the most respected screen thespian of his generation. Kevin Kline has wowed audiences with his moving portrayal of a “generous” husband in The Big Chill, a cheeky cowboy in Silverado, a sexy and comedic grifter in A Fish Called Wanda and a sleazy Parisian thief in French Kiss. Never one to disappoint, he has quite possibly met his onscreen match, partnered opposite one of the best young actors to hit Hollywood in recent years: Paul Dano.

The 25-year-old phenom practically stole Daniel Day-Lewis’ thunder in 2007’s There Will Be Blood. He’s commanded attention in nearly every role he takes on. From Little Miss Sunshine to Gigantic to The Emperor’s Club (in which he starred opposite Kline), Dano’s quiet charm and vintage good looks have become the young actor’s calling card. Now, the two leading men have re-teamed for the eccentric comedy The Extra Man.

Louis (Dano) is a sweet-natured dreamer who lives his life like he’s the star of a classic novel. After losing his job, he goes looking for a roommate and lands in the rundown apartment of a quirky but sophisticated older Manhattanite named Henry Harrison (Kline). Henry is an extra man – someone who escorts wealthy older women to and from important social events. Henry immediately takes to Louis and begins to show the young man his unique world and circle of friends while acclimating him to his bizarre activities and idiosyncrasies.

Louis settles into life with Henry while working for a small environmental publication. While there, he falls for his pretty co-worker, Mary, who appears to share Louis’ love of 1920s innocence. But for all of Louis’ best intentions, it is he who is perhaps the quirkiest part of this world. It is his penchant for transvestism that just might do him in.

The Extra Man is based on the novel by Jonathan Ames (“Bored to Death”). It comes to the big screen compliments of Robert Pulcini and Shari Springer Berman, the duo behind the smash hit American Splendor.

“We decided to work together on the script,” says Berman of the collaboration with Ames. “Even though we live in the same city, Jonathan was real busy, but we’d still work on it.”

Shooting took place on the streets of Manhattan with a shoestring budget. While capturing a scene in which Kline and Dano (in character as Henry and Louis) are traveling in Henry’s beat-up, gas-guzzling Buick Electra, the men (literally) ran into famed British actor Jeremy Irons – a close, personal friend of Kline’s. Irons was none the wiser to the shoot, since there were no complex camera setups or security detail. Kline, in character as the unkempt Henry, addressed his good buddy without realizing what the actor must have been thinking about his apparent lack of good fortune. As funny as the moment was for him, Kline marvels at the fact that Irons didn’t question a thing despite the obvious weirdness of the moment, nor did he seem the least bit fazed.

The rest of the shoot was filled with similar moments: Actor John C. Reilly (Step Brothers) steals many of his scenes as Henry’s hirsute and creepy neighbor, Gershon. But it was his method acting that really made the filmmakers and his co-stars marvel.

“[John] scared little children away with his costume,” boasts Pulcini, adding that Reilly even adopted and utilized an equally amusing falsetto for his interaction on and off camera.

Overall, it’s Kline’s praise of the film’s youngest star that is the most endearing. When asked if he found Dano attractive as a woman, the actor muses, “I kind of stayed away from him when he was dressed as a tranny.”

But he does note that even at the age of 25, Dano is doing one hell of a job carving out a place for himself in cinematic history.

“He stood up to me just fine when he was 16,” recalls the actor of their collaboration on The Emperor’s Club. “This film was no different.”