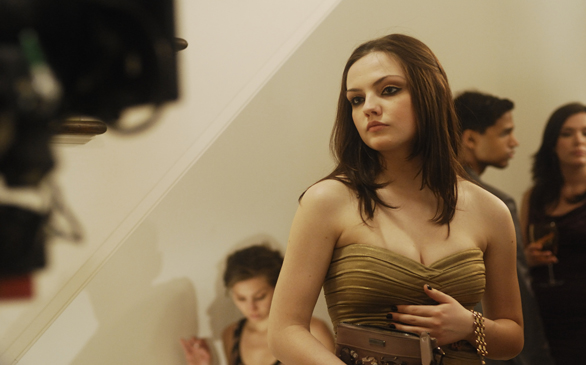 Emily Meade shares a sexy scene with 50 Cent in Twelve.

It’s a dog-eat-dog world, and it’s much harder for aspiring actors. The small, independent films (no, not the “indie” films starring big names and a decently high budget) are how acting hopefuls gain the experience and know-how of filming a movie. It’s where they learn about on-set protocol and where they befriend fellow starving thespians who will hopefully help further their career sometime in the future.

Twelve is by no means an inexperienced, independent film. Chace Crawford of “Gossip Girl” fame, Emma Roberts (niece of Julia) and Rory Culkin, who’s starring in the highly anticipated Scream 4, headline, and Joel Schumacher, the legendary ’80s Brat Pack filmmaker, directs. Despite so many famous actors fighting for screen dominance, newcomer Emily Meade steals the picture with her portrayal of a high school drama queen who gets caught in a web of drugs and self-pity in the richest and fastest crowd in New York City.

Meade, who has only a few features to her name, steps into the role with deep conviction and a grasp of the part, which is difficult when your character has a sexy scene with the one and only, Curtis Jackson a.k.a. 50 (“Fiddy”) Cent. And to her astonishment, he turns out to be a regular “Obi-Wan Kenobi. You wouldn’t necessarily know that he has this wisdom. He says things that are so simple, but if you listen to what he’s saying, he has this very wise understanding of life.”

Mr. Cent plays a drug dealer who interacts with Meade’s prissy Upper Eastsider due to her newfound addiction to a substance called “twelve.” Like his onscreen persona, Fiddy is a relatively scary figure for America’s rich, white suburbia, an image Meade immediately debunks and rectifies.

“We first met in the morning in the trailer, and he had his whole entourage there,” recalls Meade. “I was sitting there terrified, but he just came up to me and gave me a kiss on the cheek. He’s very eager and excited to be acting, and he really appreciates it. He doesn’t come in with this attitude, like, ‘Yeah, I should be here.’ He wants to do a good job. And he is incredibly sweet.”

Though her character is the Blair Waldorf type, Meade, who was born and raised in Manhattan, admits that she cannot relate. She says she “grew up with no money. Even before ‘Gossip Girl’ and ‘NYC Prep’ I never was one of those kids. But I had a lot of years researching. These kids really are living this fabulous adult life even though they’re only 17 years old.”

Based on the novel by Nick McDonell, the film is a realistic look at the underworld drug scene within America’s wealthiest. A combination of Crash and The Basketball Diaries, Twelve hits home some major themes like youth in revolt, addiction, deprivation and excess. Who better to direct such a work than Schumacher, who made teen sensations like St. Elmo’s Fire and The Lost Boys.

“He’s not only the kindest, warmest person I’ve ever met, but he has this real trust and respect for his actors,” says Meade. “Even though he is much more experienced than any of us and has a lot more going for him, he lets us do our thing. I’ve worked with a lot of directors who have treated me like claymation, stepping in and moving me exactly how they want me to be. He lets us play, and that’s how you get good performances.”

As for the film, Meade hopes that the audience take more away from it than just what’s right and wrong. She doesn’t view it as “a cautionary tale or some kind of glamorization of negative things. I don’t think you’re supposed to feel bad for us. It’s not an after-school special. It’s a mirror being held up to these kids, and you can take it however you want. You can think they’re cool or they’re jackasses. The movie doesn’t take itself too seriously. We’re looking at them in a harsh way instead of telling a tragic tale of poor little rich kids.”