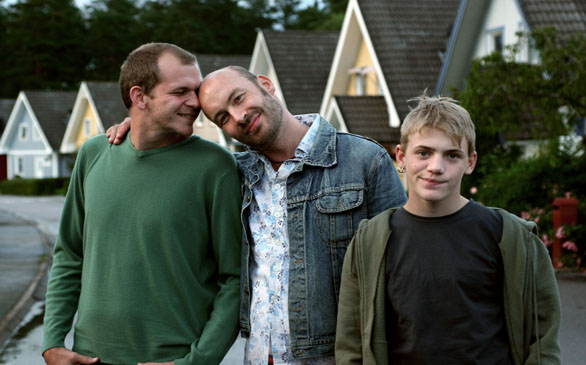 As a general rule, when you say the phrases “gay film” and “low-budget indie” in the same sentence, you usually elicit eye rolls and groans. While many films in the “low-budget gay indie” genre are usually well-meaning, they tend to bring back memories of high school drama productions. You can sense the emotions that the film is trying to convey in your brain, but you don’t feel them in your heart.

I’m happy to report that Patrik Age 1.5 is the exception to the rule. I’ve watched many films out of obligation, but had no emotional investment. At the end of Patrik Age 1.5, I genuinely cared what happened to these characters.

This Swedish gay dramedy is about Sven (Torkel Petersson) and Goran (Gustaf Skarsgård), a gay married couple who relocate to suburbia to raise a family. When they are about to give up on the adoption process, they receive news that they have been approved to adopt a 1 1/2-year-old named Patrik. When a 15-year-old juvenile delinquent shows up at their door, a paperwork snafu is discovered that originally listed Patrik as being 1.5 instead of 15.

As Roseanne once said in her eponymous sitcom, “a surprise is something you didn’t know you wanted until you got it.” As surprised as both parties are, can a couple wanting an actual baby not only coexist with a troubled, homophobic teenager, but be the better for it?

Patrik Age 1.5 had its world premiere at the Toronto International Film Festival and was later the Centerpiece Film at Frameline San Francisco International LGBT Film Festival, where it won the Best Feature Film Audience Award. Among its many other accolades, Patrik Age 1.5 was nominated for three Guldbagge Awards (the Swedish equivalent of the Academy Award). While Patrik Age 1.5 might not necessarily be monumental filmmaking, it’s a solid step to eliminate the groans and eye rolls: one small step for filmmaking – one giant leap for gay filmmaking.