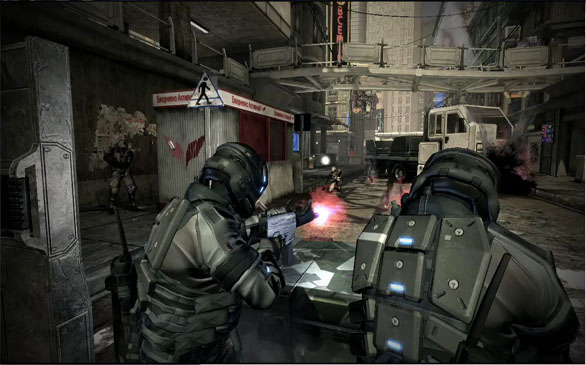 If you have spoken to anyone in the game industry or who just loves video games more than any other form of entertainment, you’ve probably heard more than enough speeches about how games are the new storytelling medium. Those of us who spend way too much time thinking about games and how much more amazing they become each year love to tell anyone who will listen that games can tell stories that are far more engrossing than non-interactive, traditional venues ever could. In a world of “Heavy Rain” tales where the player’s actions can literally change the outcome of the story in meaningful, emotional ways, what chance could a movie have?

Of course, not every game can be the cinematic marathon of “Metal Gear Solid 4” and not every game would want to be an epic. Just as there need to be shoot-’em-up films even while art films have proven that the genre can be so much more meaningful, there is room in this world for games that don’t need to be big budget experiences that last for days. Sometimes, games know what they want to do and just do it, and they may even save you some money in the process.

That is not to say that the games are lacking anything. “Dream Chronicles: The Book of Air” revitalizes the point-and-click puzzle adventure franchise on the PC with a gorgeously illustrated world and mind-bending challenges. Players can explore a mystical world in an elegant airship, gather crystals to gain new powers and solve beautifully illustrated puzzles with simple mouse controls. Best of all, it is available for purchase online for a fraction of the cost of a packaged game.

The resulting product, however, is notably lacking in the animation and full control that you can find in most modern games. “Dream Chronicles” will not have you running around or performing dazzling feats thanks to context-sensitive cutscenes, but that is not the point of the game. The experience that comes from the beautiful (if often non-animated and mostly not interactive) game is endearing enough that the standard glitz of most modern games isn’t really missed.

If “Dream Chronicles” bucks modern trends by substituting beautiful images for cutscenes, “10 Minute Solution” for the Wii opts for functionality over beauty. The game offers a few accents in the forms of backgrounds, male or female trainers and background music, but none of them are particularly polished and are often more distracting than helpful. Of course, beauty is not the point of this game.

“10 Minute Solution” – like the DVD series that preceded it – is all about making your woefully underused muscles hurt all over within a few minutes each day. By swinging the Wii remote and nunchuk in Cardio Boxing, stepping in proximity to the beat in Aerobics or moving around in the limited list of mixed games, you will find that just 10 minutes can really kick your butt into shape. It may be lacking the polish of “Wii Fit” and other high-end titles, but the game offers an intensity that is astounding for the low price tag. Add in a special 10-minute video on the disk, and the cost of the game becomes even more desirable.

Speaking of kicking butt, “Blacklight: Tango Down” for the Xbox 360, PlayStation 3 and PC knows exactly what players want from a first-person shooter. While many FPSs have intense storylines with cutscenes that look as if they were ripped from the latest big-budget Hollywood film, the real draw of first-person shooters is the ability to go online and kill people from around the world. “Blacklight” gets this desire to murder friends and random strangers and offers multiple game modes for online battles.

The emphasis of this futuristic military combat game is so heavily based on multiplayer play that you can only reach the single player levels through the multiplayer menu. The single player missions (which can also be played as co-op missions, effectively removing the single player element) are very straightforward and limited to only four different challenges. Again, this may be a problem for players who like to hunt AI more than their fellow gamers, but “Blacklight: Tango Down” is perfect for gamers who want a new online, multiplayer FPS for an amazingly low price.

Considering that modern games often run for around $50 to $60 and are often filled with extra elements to justify the higher price tag, it is nice to know that there are games that concentrate on their high points without trying to be something else.

Games & Gadgets
Gaming against sexual assault, with 'Decisions That Matter' and other video games
1,293 views