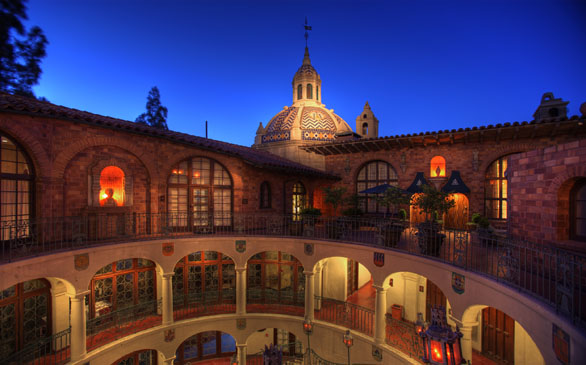 Standing in the same location since 1876, the Mission Inn Hotel & Spa in the heart of downtown Riverside remains an ideal weekend getaway. Just 60 miles east of Los Angeles, travel time is minimum – with the added bonus that you drive past neighborhoods specializing in different culinary delights. That’s a mini-vacation and an eating tour of Los Angeles all rolled into one.

Once upon a time, the Mission Inn operated as a 12-room boarding house. Recognizing Riverside’s ranking as a top vacation destination, Frank Miller (the Master of the Inn) expanded in 1903, opening the first wing of his new hotel. Currently, there are four wings (Mission, Cloister, Spanish and Rotunda) complete with 239 guest rooms.

Although Miller died in 1935 and the Miller family sold the National Historic Landmark in 1956, the family’s influence is everywhere: from the museum next door that gives guided tours of the property and houses loads of history about the Inn and the Millers, to the oldest dated bell in Christendom (A.D. 1247) that Miller purchased in England and the unique chair Miller made especially for President Taft (who weighed roughly 350 pounds) that are both showcased in the lobby.

The Mission Inn Hotel & Spa is actually a favorite hotel of past U.S. presidents (10 have lodged there so far) and celebrities. Novelist Anne Rice even has a suite named after her; she stayed there to write 2009’s Angel Time (which readers can tell takes place there).

But enough about the history, politicians and stars … the Mission Inn Hotel & Spa is an incredibly relaxing escape with tons of fun thrown in. After you’ve cruised the grounds and taken in the gorgeous Mission-Revival style architecture of the structures, pencil in some time at the lap pool and Jacuzzi. It’s surrounded by jungle-like foliage (and sweet-smelling flowers) and misters, and poolside snacks and drinks are served, making the minutes slide into hours of downtime.

If lounging around has you feeling lazy, pop around the corner to Casey’s Cupcakes (caseyscupcake.com). Blonde bombshell Casey (Reinhardt, a former cast member of MTV’s “Laguna Beach”) is actually the daughter of Kelly Roberts, the wife of Mission Inn owner Duane R. Roberts. Flavors like Marvelous Milk Chocolate and Scrumptious Cinnamon Sugar will make your mouth water just looking at them. You might even be persuaded to take some for the road trip home.

Kelly and Duane are the Keepers of the Inn and each has their own area of expertise. Kelly’s Spa (kellysspa.com) is a luxurious, heavenly nook adjoining the pool. After soaking up some sun, you’ll definitely be ready for some “me” time. Treat yourself to a Papaya Pineapple Body Polish or Healing Massage. Other services include facials, waxing, manis and pedis, and spa specials are listed on their site. If you love pampering yourself and munching on cupcakes, you can combine the two for a Casey’s Cupcake Inspired Spa Party!

After a day of unraveling and unwinding, book a table at Duane’s Prime Steaks & Seafood. The monthly prix fixe menu is always a good deal, offering dishes like Seafood Gazpacho and Butterfish en Papillote (fresh butterfish filet with julienne vegetables, tomato and a lemon wheel baked in parchment with couscous). But you also can’t go wrong ordering anything off the menu, and please, save room for the Strawberry Tart: vanilla custard-filled tart shell with fresh sliced strawberries, chantilly cream and raspberry sauce.

As you stroll back to your comfy, classy room for the night, be sure to take a moment and admire the colors of the setting sun against the Mission Inn Hotel & Spa's walls. It’s simply stunning!

On your drive home, there are a few neighborhoods you must stop to snack in. The first is Monterey Park, known for its dim sum. Another is Artesia, aka Little India. One hidden gem nestled in an outdoor shopping mall on Pioneer Boulevard is Mumbai Ki Galliyon Se. It’s a mom-and-pop vegetarian restaurant serving up the most unique and flavorful Indian food I’ve ever eaten. The $3 Piyush drink is nirvana in a glass.