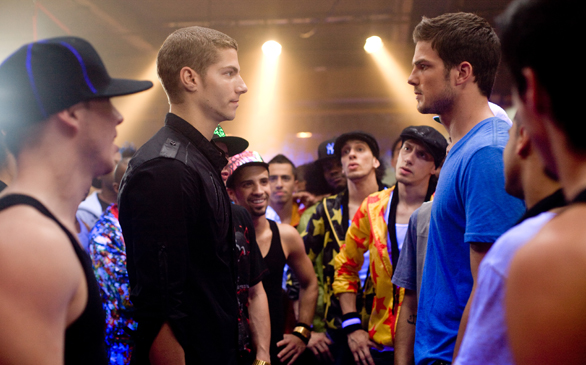 Joe Slaughter – cast as bad boy Julien in the first-ever theatrical 3-D dance movie, Step Up 3D – is the prime example of the adage, “When one door closes, another one opens.” His perfect storm of talent and good timing has swept him from one end of the country to the other, working on projects and focusing his energy on changing the way Hollywood works today.

“When you look at today versus 50 years ago, the dynamics and priorities that people have out here are so different right now, and the concept of what talent is, and real film, real directing and real producing – a lot of it is lost now,” he starts. “There’s not a lot of love in it. It’s more of a numbers game. I love the classics. I grew up watching Gene Kelly, Fred Astaire. I like old school, classic Hollywood. I’m trying to bring a little bit of that back, actually … so far, so good.”

When he was on tour with the Pussycat Dolls, the male dancers were cut from the act, forcing him to return to his hometown of Chicago after he had just recently uprooted himself. Soon after, he heard about an opening in Step Up 3D, and after auditioning in New York for the director and not hearing anything for a few weeks, he flew to Los Angeles for a an opening in Michael Jackson’s act. He auditioned for Jackson on Monday, found out he booked Step Up on Tuesday and on Wednesday he was called back for the Jackson tour.

“It was surreal to have that opportunity; it was probably the pinnacle for me. Michael was probably one of the biggest reasons I got into dance.”

Now, Step Up 3D is the first 3-D dance movie with a major studio behind it.

“It’s not even Step Up 3,” Slaughter states. “It’s being marketed as a completely different movie, because it is.”

Slaughter plays Julien, head of the Samurai Crew, the antagonists in the film.

Slaughter’s story is one supported by the phrase, “Everything happens for a reason,” to which he laughs and replies, “That’s what they keep telling me.”