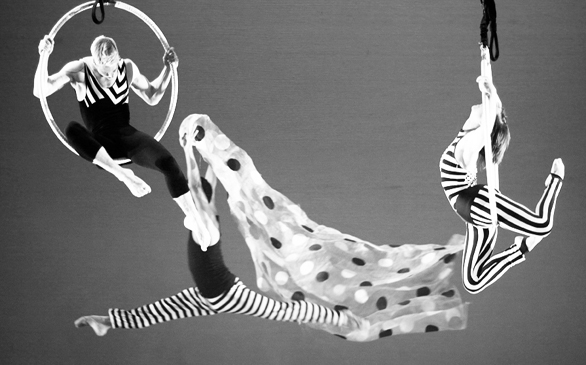 When I arrived at Mimoda dance studio to talk to Luminario Ballet members and watch their practice, the group was lounging around the middle of the floor. In the center on a red ottoman was Judith FLEX Helle, the creator of the group, giving “notes” – critiques that go along the lines of “little early” or “watch your spacing.” These are the sort of mistakes that go undetected by the casual viewer, but hint at the importance of observing the high technical and quality standards of ballet, no matter how contemporary or modern the dance they’re performing may be.

“It’s really hard to get an identity,” says FLEX Helle, the founder and managing director of Luminario, on choosing the company’s name. “We are trying to bring enlightenment and illumination to the art of ballet, and Luminario is Latin for light.”

FLEX Helle is an accomplished dancer in the traditional sense as well as an aerialist and choreographer. Founded in December of 2008, the group mixes traditional ballet with contemporary dance and aerial performances, an art form that has its roots firmly placed in the circus.

This month, Luminario is premiering Stefan Wenta’s classical tribute to Chopin and pieces by Jamal Story and Alexandre Magno, as well as reviving “Turf,” an athletic, contemporary piece choreographed by Bella Lewitzky and “Bouquet,” choreographed by Michael Smuin of the San Francisco Ballet. The company is also bringing back FLEX Helle’s aerial ballet “LedZAerial.”

Magno, a retired dancer and well-known choreographer, has been in the studio working with the dancers on his piece. After winning a choreography contest hosted by Paramount Pictures with a routine for the Footloose song “Never,” Magno immigrated to America and began a career that included dancing and choreographing with the likes of Paula Abdul and Madonna. The piece he choreographed for Luminario is based on the Damien Rice song “Cheers Darlin’.”

“A guy misses his opportunity to be with the love of his life,” says Magno. “He freezes time, and in his fantasy, he’s with her before she leaves [to marry someone else].”

Helle adds that the costuming of the piece is white and wedding themed to go along with the storyline. The piece is meant to evoke the feeling of experiencing a missed opportunity.

“I based it off of a Michael Parker panting. It’s very dreamlike, very sensual,” says Magno.

“LedZAerial,” choreographed by FLEX Helle, is a full show in its own right, set against some of Led Zeppelin’s greatest classics. The idea was inspired, of course, by a Led Zeppelin song.

“One day [another aerialist was] just training, and I thought, ‘How cool would that be, to do a whole aerial show to Led Zeppelin?’” says FLEX Helle.

The answer, apparently, is very cool. Robert Plant and Jimmy Page were such big fans of the show they saw in 2006 at the Key Club that they met with FLEX Helle. Luminario is performing five pieces from the show: “I Can’t Quit You,” “Ten Years Gone,” “The Battle of Evermore,” “Ramble On” and “Kashmir.”

“LedZAerial” fits into the company’s larger goal, which is to promote an appreciation for ballet in those who might not otherwise be interested, as well as in Los Angeles as a whole.

“It’s an ego-free project. What I want to share is really wonderful dance. We don’t have a lot of really great native ballet [in Los Angeles],” says FLEX Helle.

That driving principle can be seen in the diversity of the pieces the group performs, as well as the company’s attitude as a whole.

“We’re trying to include the audience ... if I can make every dad, brother and boyfriend have a good time, then I’ve done my job,” says FLEX Helle.

“If Walls Could Scream” by Jamal Story, for example, is a sexually-charged contemporary dance piece.

“[It’s an] insight into the personal relationships between three different couples. It’s as if you were to peer into a couple’s bedroom,” says Alex Stabler, a dancer/aerialist and assistant to the managing director.

Stabler calls the piece, in which the dancers strip down to the bare essentials, provocative, sexual and technically challenging. In the end, Luminario is just playing into the culture that Los Angeles, specifically Hollywood, has adopted for itself.

“This is L.A. This town really appreciates and reacts to a bold, confident, youthful presentation and part of that attitude is putting [sex appeal] out there,” says FLEX Helle.