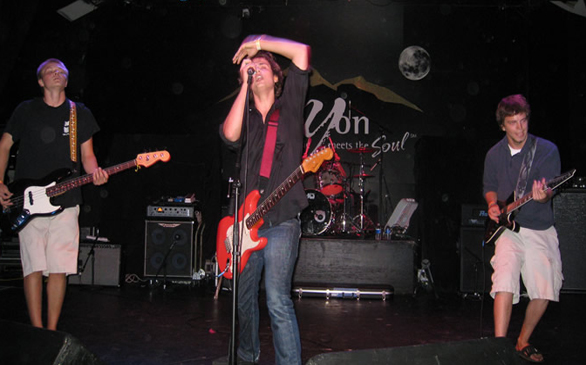 Entering the Acidic show at the Troubadour, I noticed a few kids at the door who seemed more excited than any of the eager fans who were standing in line to get in. A few minutes later, I noticed those kids were actually taking their positions on stage. Those kids began rocking; those kids were in the band Acidic.

The band brought so much energy to the show that, by the third song, vocalist Mike Gossard was in the crowd singing. By the fourth song, the crowd had already seen guitars held high in the air to go along with some great catchy choruses and even a behind-the-back guitar solo to compliment the infectious hooks.

Having played together since high school, the tightness of the showed as the members of the band played fluidly and with confidence as if there were a thousand people watching down below them, even showing the crowd their love of good music with a cover of the Beatles’ “Come Together.”

Acidic did come together that night to rock, and judging by their performance, when their time does come to play in front of a thousand people, they will be ready.

Live Show Reviews
So good, so good! At SoFi Stadium, fans celebrate a real, live concert and a worthy cause
1,100 views