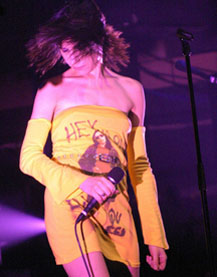 Although her approach may change from album to album, Polly Jean Harvey always creates her music with one purpose in mind – to evolve and expand artistically.

If there’s one consist aspect of P.J. Harvey’s music it’s that each new album bears little resemblance to its predecessor.

So spare her the reinvention label.

"I hate the term reinvent, because it sounds like I’m going away and spent ages thinking about my next move," Harvey said recently before the first of two sold-out shows in New York. "It’s not about that. I’m definitely doing this to see what I can discover as an artist. ... I try so hard not to repeat myself. And I think I don’t always achieve that. But it’s always my first goal, not to repeat, and to press myself and challenge myself, and to do things that scare me, that I think I can’t do."

Harvey has flourished in an alt-rock, post-punk style over the course of seven albums. She has produced a body of work that echoes the emotive spectrum, from raging red, yellow and white hot to shimmering blue and piercing, ominous black.

Amid her visceral rhythms and searing licks however, is a thoughtful acoustic side, which she elected to flush out to greater extent on her latest effort, Uh Huh Her (Island/Universal).

"I wanted to experiment with ways of instrumentation again," Harvey recalled. "I was getting varied into the recording. I was writing more songs back on acoustic guitar, which I hadn’t done for a while. So then that would trigger the way a song would sound ... But also, it was simplicity. I just wanted to find the strength of each song."

Uh Huh Her possesses a sparse, minimalist essence, unlike the layered and polished feel of her popular previous record, 2000’s Stories From the City, Stories From the Sea. While some music observers may view the new album as signaling a softer side of Harvey, don’t lay money down on it just yet.

The album still bears plenty of fiery Harvey charge, especially on the thumping "The Life and Death of Mr. Badmouth" and rapid-burst tongue-in-cheek "Who the F-ck?" It’s on the largely acoustic-driven numbers, in particular "Pocket Knife," "No Child of Mine" and "The Desperate Kingdom of Love," that the record takes on an earthy, folk-inspired ambiance.

The British-born songwriter has a unique talent for conveying bittersweet emotions and sensitivity through metaphor and direct reflection in her lyrics. But she’s also equally adept at creating vivid mental imagery through her writing. In "The Letter" from Uh Huh Her, for instance, Harvey details the simple yet inherently intimate act of writing a letter through clear and succinct lyrics.

"What’s interesting with this record was taking very small, what would be everyday, mundane moments and creating a life out of it," Harvey said, flashing a brilliant smile. "I wanted to choose things that are important to me, like writing a letter, a dying art in itself. And to construct this whole sort of love story about loving into it, and kind of base that around the very physical qualities of writing a letter."

Rather than work in a studio, Harvey wrote, recorded and produced Uh Huh Her at her home in Dorset, England, playing all of the instruments on the album except percussion. Not having the distractions of a demanding studio environment allowed her greater space to experiment, and made her songwriting experience much more fluid.

Still, she notes that finding the proper combination of music and lyric does not always come quickly or easily.

"I write lyrics and music quite separately from each other. So when musical ideals come around, it will make me feel a certain atmosphere that will then make me put my hand on one or another lyric that’s begun ... Very rarely they come together. But on the occasions that they do, it’s often a really great song."