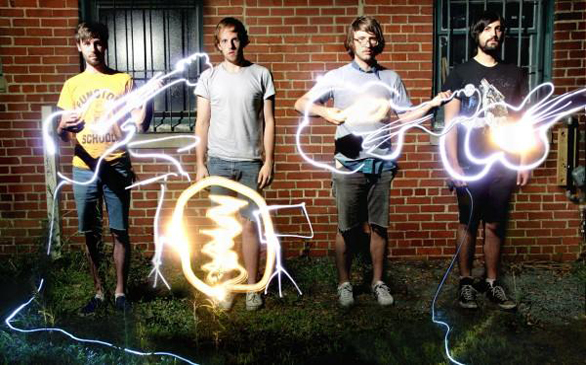 Something entirely mind-blowing about Maps & Atlases as they performed at the Bootleg Theatre was this ability to take folk to a level where it almost felt like a rock concert. Making full use of all their instruments, even the bass drum and xylophone got more of the spotlight, providing more of a stable melody than mere background accompaniment.

What Maps & Atlases does best, and totally different than any group out there, is to take unconventional guitar techniques and make them into fully catchy pop-folk hybrids. Surprisingly, simply hitting the neck of the guitar (like a Congo drum) creates a staccato-like vibration that sounds a lot smoother than strumming.

It made for a very interesting and magical sound that coupled with lead singer Dave Davidson’s Southern twang that kept some people so entranced that they lapsed into dancing convulsions. The reason for this awkward reaction to folk music: fast guitar picking, strumming and pounding, and quick drum beats followed by xylophone sounds.

You wouldn’t expect guys sporting long hippy beards to go crazy on their instruments, but coming from Illinois, Maps & Atlases created a scene that seemed like we were watching them in simple musical improv, individually doing their own thing while feeding off the rhythms of their band mates. It was like they were creating each song for the first time on stage.