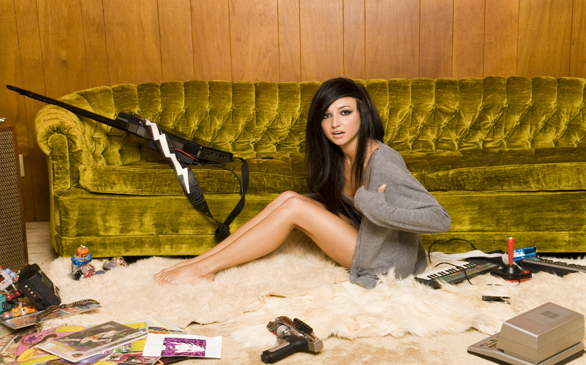 With an interesting look and an even more interesting sound, it wasn’t long before Canadian electro-pop sensation LIGHTS would be noticed by the eyes and ears of America. She recently went on tour in the spring with synth-rock band Owl City and returns to Los Angeles this month in support of her new LIGHTS. ACOUSTIC. EP – a spectacle that music lovers won’t want to miss.

LIGHTS is the type of authentic live performer who is hard to come by. Tattooed and in a tank, she’s edgy yet naturally gorgeous at the same time. Between songs in the middle of her set, she’s warm, almost childlike and innocent, fumbling as she repeatedly thanks the crowd for watching her and supporting. When the music finally plays and the song starts, however, her voice cuts. She delivers pitch-perfect vocals on command, dabbed in colorful pop electronica that is soft as it is solid.

Take a listen to “Ice” from her debut album, The Listening. The creative display of harmonic blends dominated by a spastic techno tune will have you feeling like you’re trapped in an ’80s video game. On the more romantic “February Air,” she evokes a whimsical dream’s slow dance muddled in haunting falsettos and poppy synthesized texture. “Second Go” is her pulsating plea for a second chance with a loved one, drenched in beat-heavy effects and her signature riffs.

Behind the microphone, the singer is never standing still. Usually, she can be found on stage strumming the guitar, working the synthesizer or playing the piano (or on some tracks, even the keytar). She’s the real deal. LIGHTS’ ability to not only sing and play musical instruments is even more impressive considering she writes and produces all her own music – a good first step she recommends to new performers.

“It’s hard for me to describe my sound. I love experimenting and trying out new things all the time. Before you concentrate on anything else (your look, style, whatever), at the core of it, you have to have good music. It’s all about creating the best song you can possibly make, and once that’s done, just hope people like it,” says the 23-year-old new wave musician.

She adds, “People will listen if they know you’re being true.”

LIGHTS’ organic songwriting roots come from her varied background. Not only does she draw inspiration from her musician father, but songwriting played an integral part of her childhood.

She reflects, “Growing up, I lived all over the world … the Philippines and Jamaica. With all the traveling and being able to see so much at such a young age, music was definitely a good thing for me to get into and be creative with. My parents introduced it to me and are really the reason why I’m still at it today.”

Named Best New Artist at the 2009 Juno Awards, LIGHTS is well on her way to cracking the world’s toughest sell, the American music scene. In such a short time in the spotlight, she’s already received her first No. 1 hit in Canada and more than 19 million plays on MySpace, catching the attention of the Toronto Star and music media giant Rolling Stone, who dubs LIGHTS as music’s “retro new wave keytar-rocking pixie.”

The singer’s music videos, inspired by graphic artists and comic books, have all become instant YouTube favorites. Even cooler, she’s been touring pretty much year around since 2008, playing shows around the globe, including gigs with Warped Tour 2009, British band Keane and fellow Canadian artist Rich Aucoin.

Given today’s shaky music industry, new artists find it harder and harder to breakthrough and make it. Luckily for her though, LIGHTS’ star power is brilliant enough to take her to the top. With her relaxed attitude, right now LIGHTS is just focused on riding the wave and hopes to find more fans along the way.

At her last show in Los Angeles, she glowingly admitted how she couldn’t wait to come back.

“Every time you play a show, it’s always so special, but when you come back, it’s nice to see more people in the audience than the time before singing your songs,” she said. “Being able to share my music with my fans keeps the work exciting and keeps me motivated. That’s what makes going after the dream so worth it.”