Out of This World: The Science of Space Movies: Aug. 5-7 @ Various Locations 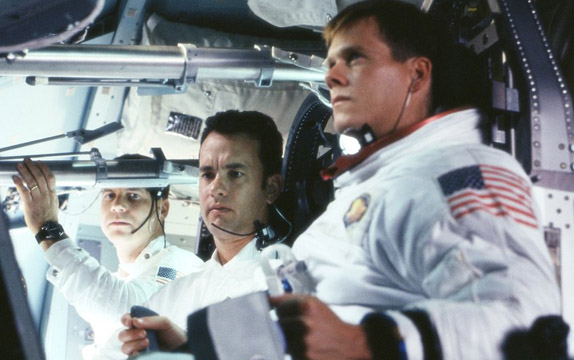 One of the advisors on Apollo 13 will be at “Out of This World: The Science of Space Movies.”
(Credit: Universal Pictures)

Don’t turn the page so quickly. I know that for some of us, myself included, science class was years ago and needs to stay there in our miserable memories. I survived chemistry, but physics might as well have been coloring class for all the know-how I learned. Of course, as much as I hated it, I couldn’t help but feel a pang of jealousy for the science nerds who could understand the mumbo jumbo that Einstein would spit. I was a good student in high school, and it killed me that physics posed such a threat.

The only time I ever felt like I could excel in the sciences was when I would watch films that, for the most part, defied even basic physics. Take Spider-Man. Not only is Spidey biologically impossible (Have you ever heard of an arachnid-human hybrid?), but his ability to climb walls with his hands and feet and hold cable cars by a thread directly disproves Newton’s Laws.

But of all the thousands of films that go against common sense and proven science, my favorite is Back to the Future. We go to the movies to be amazed and to leave reality far behind, and if there is one thing I wish I could do it would be time travel. Imagine all the things you could experience, all the time periods you could corrupt with your 21st century knowledge. “Family Guy” creator Seth MacFarlane must have been reading my mind because it was recently disclosed that he purchased the actual DeLorean from the film and spent a whopping $20,000 on improvements. So if you see it cruising the streets, know that you are not going crazy.

Anyway, the ridiculousness of the physics of film – the point I was trying so hard to make. I am obviously no expert at science, so it wouldn’t do you any good to listen to me. But there is someone who has done extensive research on the subject and who would deliver a much more interesting and factual sermon than I ever could. Adam Weiner is the author of Don’t Try This at Home! The Physics of Hollywood Movies and the current physics teacher at the Bishop’s School, a private high school in La Jolla, Calif.

On Aug. 5, Weiner is hosting “Out of This World: The Science of Space Movies” at Samuel Goldwyn Theater (8949 Wilshire Blvd., Beverly Hills). Presented by the Academy’s Science and Technology Council (so you know it has to have some basis in the real stuff science is made of), the evening’s lecture will include an in-depth look at how film portrays the basic principles of physics and how fundamental laws as we know them are unceremoniously thrust into the gutter.

I love to believe in science fiction as much as the next comic geek, and I don’t think Weiner’s goal is to dissuade you from enjoying the most recent Predators sequel. What he is trying to do is make physics a fun topic again. This isn’t like your high school class. There isn’t a test, and there won’t be any formulas to memorize. Instead, Weiner has an interactive presentation in which physics concepts will be used to analyze some of our favorite scenes from films like Planet of the Apes (1968), Superman (1978), Apollo 13 (1995), Contact (1997), October Sky (1999) and Star Trek (2009). If you actually like science, then this will be even more beneficial for you.

Also in attendance are several of the films’ creative teams who will discuss how the movie magic came about. Contact writer Ann Druyan, Oscar-winning visual effects artist Richard Edlund (Star Wars), Event Horizon writer Philip Eisner and former NASA flight director Gerry Griffin, who served as a technical advisor on Apollo 13 and Contact will be featured on the panel.

The event continues with two nights of screenings, including the groundbreaking 1929 Fritz Lang film, Woman in the Moon (Aug. 6) at the Linwood Dunn Theater as well as two films that will be screened in collaboration with the Cinefamily on Aug. 7, Project Apollo (1968) and For All Mankind (1989).

My own theory of relativity is such: If you can make a movie about it, it remains in my realm of possibility. The imagination is a scary and wondrous thing, so don’t knock it down. Just in case.