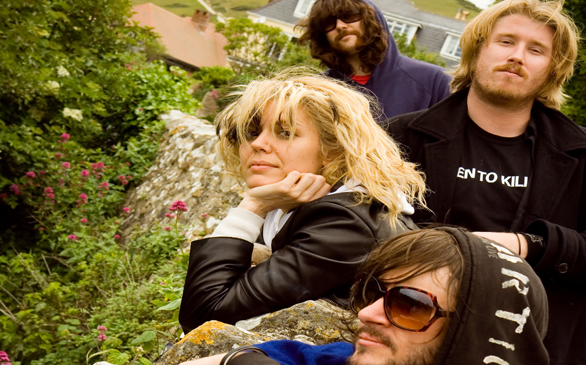 The upcoming release from Los Angeles pop-rock band Killola is called Let’s Get Associated, and if you like the sound of female-fronted bands like Missing Persons and No Doubt, then get associated is exactly what you’ll want to do. Let’s Get Associated comes on a dog tag-style USB drive that utilizes Aderra’s new PushOvr technology; just plug the dog tag into your computer and it will instantly download any available fresh Killola content. The band plans to offer new songs, remixes, live recordings, music videos, photos and other exclusive surprises to dog tag holders.

When they’re not thinking of ways to use the new technology, the members of Killola are busy producing and writing music for the feature film Girltrash: All Night Long, a movie that’ll also star Killola’s singer, Lisa Rieffel. Let’s Get Associated drops Aug. 10, and you can see them play live at the Roxy Aug. 21.

Iggy’s In the Hands of the Fans

Iggy and the Stooges perform their legendary Raw Power album live in its entirety at this year’s All Tomorrow’s Parties Festival in Monticello, N.Y., Sept. 3. The group and MVD Entertainment have launched the In the Hands of the Fans contest whereby six fans are chosen to shoot the performance on video for use in a film slated for broadcast and DVD and Blu-ray release in 2011.

Entrants need to shoot a brief video of themselves asking the band questions about Raw Power or otherwise demonstrating why they should be one of the winners. Winners need to provide their own transportation to the festival, pay for their own lodging and bring their video equipment with them. Entry deadline is Aug. 20; details at inthehandsofthefans.com.

Pre-orders are now being taken for the next album from hard rockers Disturbed. Reprise Records releases Asylum Aug. 31, and every copy of the album comes with Decade of Disturbed, a bonus documentary featuring lots of candid footage shot over the band’s entire career.

The limited edition version of Asylum appends live versions of “Down with the Sickness” and “Stricken” to the CD and nine “Disturbed Dissected” instrument instructional videos to the DVD. The package also includes a double-sided poster showing guitar tablature. The next Disturbed area appearance is Sept. 17 when the band hits the Verizon Wireless Amphitheatre as part of the Uproar Festival.

Koffehouse’s Fourth Annual Evening of Independence benefitting the MusiCares organization takes place Aug. 7 at the Ford Amphitheatre. Koffeehouse is an L.A.-based live music promotion and production company, and this year they’re bringing in Katharine McPhee, Jon McLaughlin, honeyhoney, cellist Tina Guo with Marcelo and L.A. indie rockers the Daylights for the show. Also scheduled to appear in a special reunion show is Sixpence None the Richer; they haven’t performed together for six years.

A pre-show featuring Terra Naomi, Freddie and Francine, Shawn Hlookoff and Jayme Dee is going to be held in the Ford’s Edison Plaza, and you can bring a picnic basket and some wine to enjoy during either the pre- or main show. Angela Sun of ESPN hosts the event and all proceeds go to MusiCares, the charitable arm of the GRAMMY organization. More info at FordTheatres.org.

All For the Hall

The Country Music Hall of Fame and Museum’s All For the Hall fundraiser returns to Los Angeles for a second consecutive year. Slated for Thursday, Sept. 23, at Club Nokia, the event again features a “guitar pull” format featuring Hall of Fame members Emmylou Harris and Kris Kristofferson and rising superstar Taylor Swift.

The relaxed “guitar pull” style of show features any number of performers on stage at once swapping songs, stories and personal recollections. Proceeds from the event help to rebuild portions of the Hall that were damaged by the recent flooding in Nashville. CountryMusicHallofFame.org.

Hot Seattle band Star Anna and the Laughing Dogs play Spaceland Aug. 18 where they’ll preview their Sept. 4 release, The Only Thing That Matters. Catch them again Aug. 19 at the Levitt Pavilion in Pasadena.