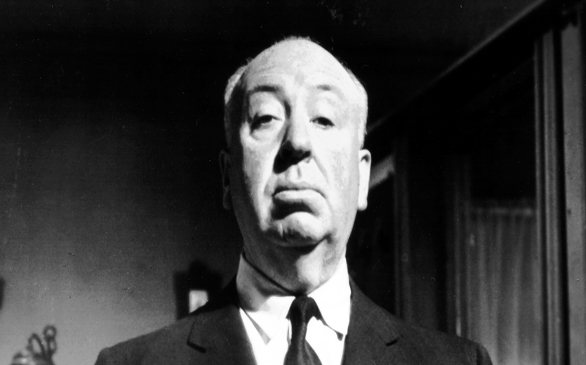 Alfred Hitchcock on the set of Psycho
(Credit: Courtesy of the Museum of Modern Art/KRT )

I wasn’t around back in the ’40s and ’50s. Considering that fact, I think it’s probably safe to say that I wasn’t going to the movies back then. But I love older movies and watch them regularly. Every generation has its own era of filmmaking, and very often lots of films from previous eras become culturally and stylistically dated, which is unfortunate because the storytelling in older films kicks ass.

But when it comes to older films, there is one man whose name, reputation and body of work towers over everyone else, and whose influence is all over almost every genre film that comes out today. The man I’m speaking of is Alfred Hitchcock. Of all the old films and filmmakers I’ve seen, when you look at Hitchcock’s films, you begin to see what would become the first “recognizable style.” When you’re watching a film, you’re watching the actors and the story, but there are certain filmmakers who make you notice them and the style with which they’ve made the picture just as much as you’re noticing the actors and the dialogue.

When you watch a film by filmmakers like Stanley Kubrick, Sergio Leone, Quentin Tarantino, Christopher Nolan, Spike Lee, Ridley Scott or Jim Jarmusch, to name a few, they make you notice them with their style and film grammar. It’s a mix of the type of stories they tell, their casting and the way they shoot that make up their own unique style that is tangible and recognizable when you watch the film.

Hitchcock is arguably the first guy to create such a unique style that when you’re engrossed in one of his works, even though he’s not physically up there on the screen alongside Cary Grant or James Stewart, he’s just as much at the forefront of your mind as they are. Although Hitch’s films lack the cutting-edge technology of today, they hold up better than most films of that era.

One of my favorite Hitchcock films is Rope, starring James Stewart, which is about two dudes who murder one of their friends, and then host a dinner party for the victim’s friends and family with the dead body stuffed in a chest right in the middle of the room the whole time. What’s so brilliant about this film is that it happens in real time, and the whole 80-minute runtime is made up of only 12 long shots. It’s a concept that was totally ahead of its time, and just watching the film is like a whole film class within itself.

Then you look at a film like The Birds. Hitchcock takes almost 40 minutes out of a two-hour film to set up the main characters and their relationships before he starts throwing bloodthirsty birds at them. Nowadays, it’s unheard of to not have crazy shit happening within the first 30 minutes of the film.

And then you get to Lifeboat, one of my all-time favorite films period, which is set in WWII and follows a group of Americans from a cruise who pile into a small lifeboat after their ship is sunk by a German U-boat. Here comes the kicker: The U-boat sinks as well, and they rescue one of the crewmembers. The lifeboat becomes a microcosm of society as the survivors decide what to do with their prisoner.

Cinemax is doing a Hitchcock marathon right now, and if you have On Demand, you can just catch them whenever you want. If you don’t, you’re missing out. And if you’re a lover of movies and you haven’t experienced Hitchcock’s body of work, you owe it to yourself to do so. But if you think you love movies and you refuse to watch Hitchcock’s films because you think they’re “old” or “dated,” then you’re an ass.