Enemies of the People 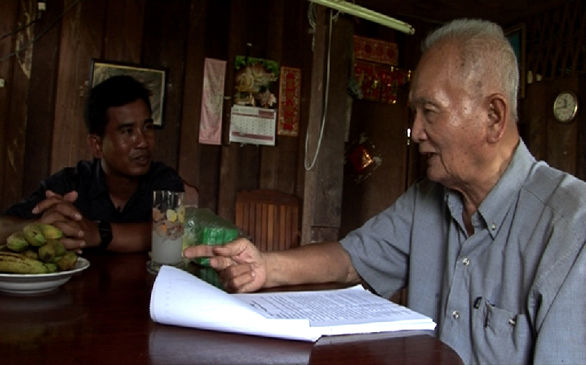 You would think this would be, if anything, a story of revenge. They killed his father, a middle-income peasant, for refusing to give them his buffalo. They forced his mother to marry one of them; she ultimately died in childbirth. They allegedly murdered his brother in an undercover coup. They are the Khmer Rouge, one of the 20th century’s most brutal regimes. Ruling Cambodia throughout the ’70s, the Khmer Rouge fell in 1979 but left a physical and emotional trail of death and devastation for grieving families across the country.

Thet Sambath was the one who was left orphaned by the time he was 6 and who was forced to escape to a refugee camp on the Thai border by the time he was 10. Taught English by American missionaries, Sambath became a journalist with a wife and kids. With adulthood, he began probing into the Killing Fields of Cambodia where no explanation was given as to why so many were killed by the regime. Over years and years, Sambath befriended those who implemented the Khmer Rouge kill policy and who most likely murdered his family. Which is where the documentary Enemies of the People dares to go.

Sambath, with the help of co-director and cinematographer Rob Lemkin, travels to the remote Cambodian countryside where the massacre took place. The team has gathered interview after interview with the killers and organizers of the Khmer Rouge.

In one particularly intense scene, Sambath asks an old man who admits to killing many of the peasants in the area to demonstrate how he used to commit the crime. Hesitant at first, the interviewee eventually comes around, pushing a volunteer to the ground face first, holding his head back and mock slitting his throat like he is humanely slaughtering a pig and not viciously taking the life of a living person.

After watching the film, it’s apparent why Sambath is not seeking revenge. Many of the main characters are too old (Nuon Chea, aka Brother Number Two, who is partially responsible for the genocide, is 84 years old.) to condemn outright. As he says, the end goal of the journey is to find answers and to reveal the truth that was buried by nervous journalists and hushed citizens. Similar occurrences of genocide have taken place in every country that is politically active, which is every single country in the world. As a regular citizen, Sambath has done his job by forcing the public to find fault and let the blame lie where it should.

Enemies of the People releases in select theaters Aug. 6.