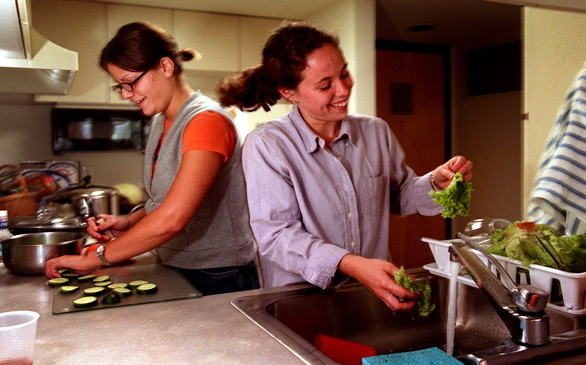 Think of all the fun you can have – and money they would save – if your parents bought you a house.
(Credit: Michael S. Wirtz/Philadelphia Inquirer/KRT )

Sharon Nilsson has twin sons entering college this fall. One son is attending New York University; the other won a partial scholarship to study at Fordham University uptown. Although the family is elated that both boys have accomplished academic success, one thing really threw Nilsson for a loop.

“God, it costs a fortune to pay for college,” she says. “There’s books and tuition, for sure. But there’s the other stuff – the room and board and the food costs. My boys can eat you out of house and home.”

Nilsson is like many parents who are faced with the tough cost of financing a high-end education. Only instead of the fears and worries that most moms and dads experience with one college-age child, she has to budget for two, as well as a daughter who is about to enter her junior year of high school (and will be starting college in 2012).

“I’m thankful that my boys decided to pick schools in the same city. It makes things a lot easier,” she says.

Nilsson decided to take a proactive stance and cut corners by any means necessary. Instead of paying the hefty $6,000 to $15,000 per year cost of undergrad housing, she and her husband decided to cut costs in a rather unorthodox way.

“We spend a lot of time out that way and my boys know their way around fairly well, so we went ahead and got them a place in Jersey City,” she says.

Nilsson, her current husband and ex-husband (the boys’ father) pooled their resources and purchased a two-bedroom, 1.5 bath within a brownstone in the historical city located less than 10 minutes outside of Manhattan by way of the PATH train.

That’s smart math in today’s economy. The projected cost to house Nilsson’s sons for four years of undergrad study could run upwards of $120,000, depending on which dormitory they draw at their respective schools. For this family, keeping an apartment that the entire brood can enjoy during holiday visits to the Big Apple as well as providing her sons with a home as they brave the (post-graduate) job market was a gift she couldn’t resist passing on to them.

“They’ll take over the mortgage when they get jobs and pay roughly the same amount each month that they’d have to pay in rent. Not only that, but we aren’t throwing away all that money. This stays in the family and can be sold should we need the money.”

As innovative as Nilsson is, she’s not alone. Parents, in record volume, have been crunching the numbers and coming to similar conclusions about cutting college costs for their children. The movement is so popular that it has sparked several books, including Profit by Investing in Student Housing: Cash In On the Campus Housing Shortage by Michael Zaransky. Zaransky notes that the current system of on-campus housing has its drawbacks, such as full-capacity rooms and suites as well as unexpected lodging cost increases.

But cost-cutting isn’t the only impetus for forging into the real estate market. While many students enjoy the fun and camaraderie associated with residence hall life, for some, it can be overrated and rife with distractions.

“I hated the dorms,” says Sherika Johnson. “Mine were co-ed. All they ever did was party. A girl almost died down the hall from my room. I’m serious! Ooh, it was bad.”

Johnson would have loved having the opportunity to move into a private residence as she completed her degree in accounting.

“It would have made a big difference, I assure you. I remember calling my mama and just crying because I couldn’t get any sleep and I was stressed out and couldn’t get peace and quiet. That’s probably why I live by myself now,” she says, laughing. “I am not about sharing my private space these days.”

Meanwhile, Nilsson and her family have said their goodbyes. She and her husband moved the boys into their new digs in July 2010, giving them ample opportunity to enjoy their new town before their respective freshman years get underway.