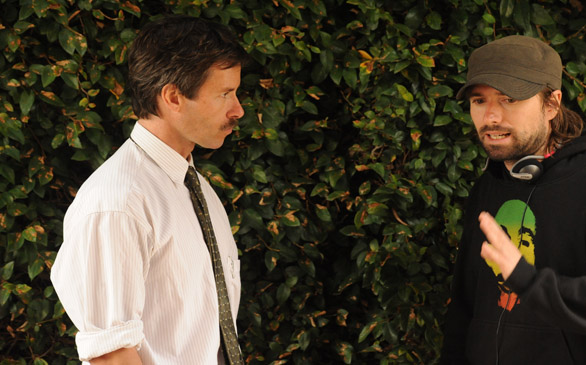 Pound for pound, Animal Kingdom is the best film of 2010.

Made for a fraction of Inception’s catering budget, writer-director David Michôd’s gritty, enthralling, casually brutal Australian crime drama took top honors at Sundance earlier this year and opens this week amid a cluttered summer weekend, which includes Scott Pilgrim vs. the World, The Expendables and Eat Pray Love. But don’t let this indie get lost in the shuffle because missing out on Michôd’s debut feature would be to deny yourself one of the year’s best filmgoing experiences.

Entrenched in a family of Melbourne criminals, Animal Kingdom stars a slew of exceptional Australian actors, including Guy Pearce, Jacki Weaver, Ben Mendelsohn, Joel Edgerton, Luke Ford and Sullivan Stapleton, but the film centers around newcomer James Frecheville, who was cast through open call auditions after competing with over 500 kids. Plucked out of high school in the last semester of his senior year, Michôd knew the success of his project hinged on finding a young unknown who would be the film’s nucleus.

“When you cast a kid at the center of your film, it feels a little like you’re on a high-wire when you go into [the auditions] because you have no idea if you’re going to find the kid that you need,” Michôd explains as he settles into a chair in a 12th-floor suite at the Four Seasons in Beverly Hills.

Young and handsome, the writer-director looks like he could be the love child of Wes Anderson and Tom Cruise. Michôd says he was searching for someone who was capable of creating a character so emotionally stunted they seemed autistic.

“I needed an actor who could create that blankness [and still be] interesting to watch,” he says. “It wasn’t like with James there were 12 close contenders and we had to make a decision. It became quite apparent early on that James was the only contender. It was the level of detail in his performance that thrilled me.”

The details of Animal Kingdom are well-tread territory for Michôd, who has been working on the film for almost a decade. While 2010 is a big year for him, with both Animal Kingdom and Hesher (a film he co-wrote that stars Natalie Portman and Joseph Gordon-Levitt) debuting at Sundance and making their way into theaters, Kingdom has been his pet project since he graduated from film school.

“It took eight years to write,” Michôd admits, smiling a little sheepishly. “I taught myself to write over those years. I was fresh out of school when I started writing, and I just had this idea of a big Melbourne crime film. That first draft is laughably infantile. It’s just full of cool, crime-y shit. I look back on it now and there’s not a single line of dialogue, not a single scene, that’s still in the movie. I can observe how the script improved as my writing matured and as I matured personally.”

Part of that maturation was realizing no one was going to let him direct his own script simply on the merits of his eager charm or screenwriting abilities, so he directed a short film to prove he had the visual chops as well.

“I went and made a short film called Crossbow, which, like Animal Kingdom, was an attempt to represent a world that was sort of dark and dangerous but yet had a poetry to it, a contemplative beauty,” he says.

The short was a huge hit at film festivals, including Venice and Sundance, and Michôd quickly found his career taking off.

“One of the beautiful things about Hollywood is that when you’ve done something new that gets attention, it can transform your career overnight, even if it’s a short film. On the back of [Crossbow], Animal Kingdom started to feel inevitable, which was scary in itself. From that point, everything happened really quickly.”

He says throughout the pre-production and filming process, it was fear that propelled him and made him a better filmmaker.

“The terrifying thing and the exhilarating thing about shooting,” he smiles, “is you live in a state of adrenalized semi-anxiety for the whole duration of the shoot. But it’s kind of necessary. That anxiety produces a kind of critical rigor from which better work comes.”