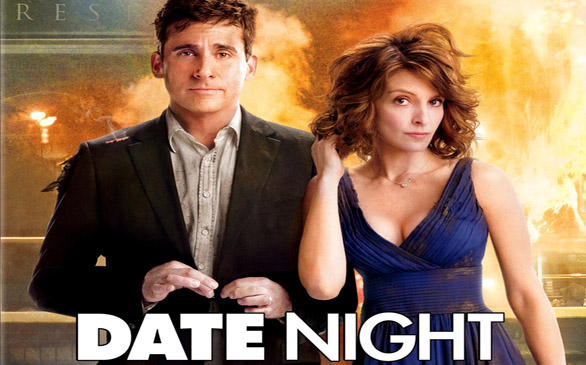 Funny Business: Two of the funniest people in Hollywood, Steve Carell and Tina Fey, team up for a disastrous night out in Date Night. Taking a page from The Out-of-Towners and After Hours nightmare book of comedy, nothing goes right as the New Jersey parents try to enjoy a night in Manhattan.

The Idiotbox: Eighties pop culture icon Max Headroom finally comes to DVD in Max Headroom: The Complete Series. This ambitious, ahead-of-its-time cyber punk comedy takes place 20 minutes into the future, where TV viewing is mandatory. An investigative reporter, with the help of his computer generated clone, fight crime and get the story.

Robert Carlyle and Lou Diamond Phillips lead a crew of civilians and military personnel stranded in deep space aboard an aging ship programmed to explore the farthest reaches of the galaxy in Stargate Universe SG-U: 1.5.

An FBI Agent (Rob Morrow) teams with his genius mathematician brother (David Krumholtz) in combining traditional investigative methods with number theory to track down criminals in the continually inventive Numb3rs: The Sixth Season.

In Toon: From the creators of “Robot Chicken” comes “Titan Maximum,” a hilarious parody of animated Japanese imports from the ’80s like “Voltron.” Seth Green leads a cast of teens who pilot a giant robot in fighting evil. Season One is now available.

Stranger Than Fiction: The ugly truth about the bottled water industry is exposed in Tapped, a new documentary from the producers of Who Killed the Electric Car? From the environmental effects to the lack of regulation to the raping of communities and absurd price gauging, there’s plenty of evidence here to make you think twice before buying that Evian.

Michel Gondry crafts an intimate and highly personal documentary with The Thorn in the Heart. Combining old Super 8 home movies, new interviews and animation, Gondry paints a portrait of the fraught relationship between his aunt, a former schoolteacher, and her son.

Based on the best selling book The Shock Doctrine, Naomi Klein: The Rise of Disaster Capitalism shows how neoliberal capitalism exploits war, terrorism, and natural disasters to survive and flourish.

Blu Notes: Peter Bogdanovich was doing genre pastiche long before Quentin Tarantino. His ode to the screwball comedies of the ’30s, What’s Up, Doc?, stars Ryan O’Neal and Barbra Streisand as a comically mismatched pair.

The Horror! The Horror! Liam Neeson and Christina Ricci star in the macabre psychological thriller After.Life. Ricci wakes up from an accident to find a funeral director (Neeson) preparing her body for her funeral. Is he really transitioning her soul or is he burying her alive?

Under the Radar: Colin Farrell stars in Triage, a harrowing drama about a photojournalist who travels to war-torn regions, but returns home scarred after one trip. Danis Tanovic (No Man’s Land) directs.

Sam Neill stars in Under the Mountain, a special effects fantasy epic about two kids who discover a family of shape-shifting creatures living in the creepy old house next door and set out on a perilous adventure.