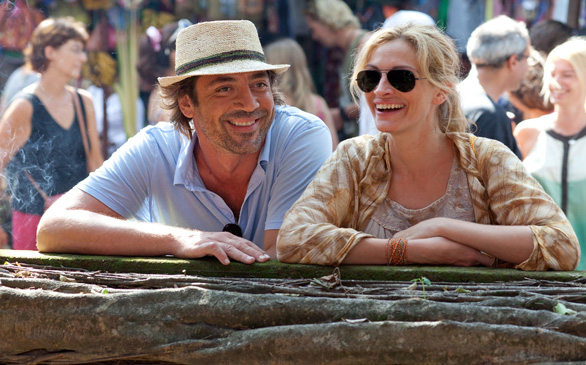 Julia Roberts is getting a puppy, and she’s christened him Javier. No, not really, but working with sexy Spanish hunk Javier Bardem might be a comparative experience.

“It was like deciding to get a puppy,” says the dark-haired actress. “You have everything in your house worked out. [You think], ‘Oh my life is so settled, so fixed. I will get that puppy.’ And then the puppy comes in, and you’re like, ‘OK, I’m too tired to have a puppy.’ He came in with all this gusto and enthusiasm. His excitement was so contagious.”

And like any good doggy trainer, Roberts has Bardem following where she walks and licking her face in their latest film Eat Pray Love, which is based on the novel of the same name by Elizabeth Gilbert, who accounts her quest to find herself in Italy, India and Indonesia. But don’t assume that it was all beaches, pasta and puppies on set.

“It was well reported that I was terrified to be around him after No Country for Old Men,” recalls Roberts about Bardem. “I’m sorry to say he pulls out a picture from [the movie], and I was like, ‘My eyes, my eyes!’ I had just got a really good grip on the way he really looks, and then he gets it back in there.”

Roberts stars as on-screen Liz, whose marriage crumbles when she realizes she’s out of love with doting husband (Billy Crudup). After an unsuccessful tryst with a younger man (James Franco), the New York writer finds herself in her bathroom on her knees, praying to a God with whom she has never had a working relationship. And so she’s off to Italy first, where images of pasta and gelato tantalizingly flood the screen. Director Ryan Murphy hopes to inspire an appetite in an audience of the undernourished public.

“In our culture right now there’s so much guilt around food,” he enthuses. “Everyone’s on a diet or talking about diets. Just to have a scene where a woman eats with unabashed joy is amazing and lovely.”

Roberts was all for the full-bellied sentiment when she was shooting in Naples where real-life Gilbert visited to chow down.

“We got there at eight in the morning, sat down to shoot and proceeded to start my day with eight entire slices of pizza in 45 minutes,” says Roberts with a hint of sarcasm. “So the deliciousness of something wears a tiny bit after piece seven.”

Like the novel, that even Bardem has read and admits, “wasn’t a woman’s book at all,” the film has something for everyone. Because it was shot in chronological order, the actors were given room to enjoy the journey that was so beautifully described in text. It was also shot entirely on location, which made for an interesting experience.

“Wherever Ms. Roberts goes are the screaming throngs and paparazzi,” jokes Murphy. “That’s what happens with a movie like this that was shot so much outdoors in real locations. It was challenging at times, but I don’t think there were any obstacles. I gained seven pounds. I think that was an obstacle. I was drunk every night in Rome; that was an obstacle.”

In India, Gilbert learns the power of prayer. She befriends Richard from Texas (Richard Jenkins), who has an amazingly lengthy and emotional one-shot monologue on the rooftop overlooking the scenic country. For the actor who was raised in small-town Illinois, this is what moviemaking is all about.

“I grew up watching movies, and that’s how I saw the world in a small Midwestern town,” says Jenkins. “When I became an actor, I thought, ‘Man, I’m going to go everywhere!’ I ended up seeing Toronto and Vancouver. This [film] is what I thought it would always be like. You would go everywhere, not just the sound stage.”

Bali is the last stop and, fittingly, where she finds more than puppy love in the form of Bardem. Although each stop in the journey is different from the next, Roberts has found (or stolen) the tie that binds them together, a message that ultimately wins over the reader and audience member alike.

“I think that if you have gotten to a place in your life where you have found a capacity to eat and nourish yourself in that way, and love and nourish your life in that way, that somewhere along the way you’ve figured out your own identity and how to pray and relate to an energy or creation that’s more than you. Or else you can’t accomplish those other things. And Javier told me that once. I’m just repeating it.”