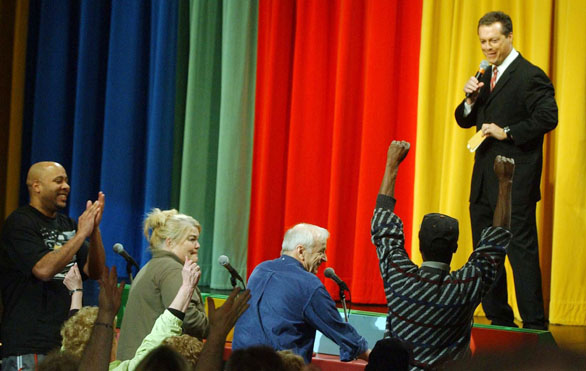 Hey, boys and girls! You know what time it is? It’s time to play NAME ... THAT … FILM! The exciting, new game show about America’s only remaining quality export: movies. The rules are simple: Answer the questions by naming the title of the film. If you’re correct, you get to keep your wicked life. If you answer incorrectly, it’s off to the chopping block for you (and I don’t mean that figuratively)! In addition to getting to walk out of here alive, whoever answers the most questions correctly gets a partial-expenses paid vacation to Mission Viejo, Calif., and two discounted tickets to a double feature of Gigli and From Justin To Kelly. Now, without further ado, it’s time to play NAME … THAT … FILM!

1) Which one of these films about the Vietnam War was not based on a book?

A) Casualties of War

2) Which film does not feature one of Batman’s vehicles getting destroyed?

3) What film does Quentin Tarantino borrow the opening credit sequence from for 1997’s Jackie Brown?

4) What film by the Coen brothers is loosely based on one of Homer’s epic poems?

C) O Brother, Where Art Thou?

5) What film was almost directed by Sergio Leone?

B) The Deer Hunter

6) Which film was passed on by several studios as a completed film, then went on to win multiple Academy Awards?

7) Which Marvel superhero film did not get a sequel?

8) Which film by Steven Spielberg was originally going to be directed by Stanley Kubrick?

A) War of the Worlds

C) Catch Me If You Can

A) The Man Who Knew Too Much

B) Strangers on a Train

10) Which one of these films directed by Tim Burton does not star Johnny Depp?

Tune in next week for the answers, and to see if you get to keep your wicked life and win a trip to Mission Viejo, Calif.