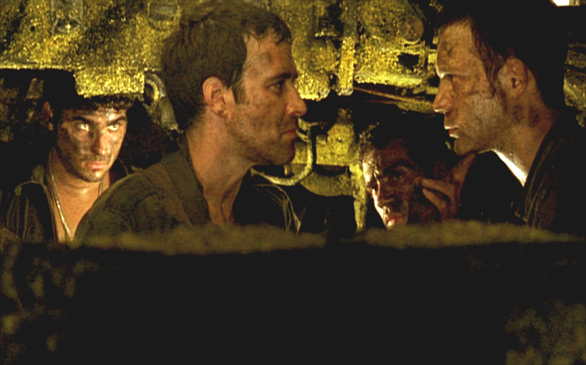 Once you’ve seen Lebanon, you’ve seen war. The film gives a stunning glimpse into the First Lebanon War in June 1982.

Lebanon follows four young men in one lone tank: the gunner Shmulik, the commander Assi, the driver Yigal and the loader Hertzel. They are sent to search a town that has already been attacked by the Israeli Air Force. Because all four men are novice soldiers, the film shares the oft-overlooked perspective of the new soldier confronted with a multitude of uncertainties. The men must not only survive war, but each other. As pressures elevate, more hardships arise with their fellow crew.

Yoav Donat (Shmulik) gives a stellar performance as a gunman who is struggling to make right from wrong. He invites you in to the crucial moments that open your eyes to the courageous strength of a soldier.

Itay Tiran (Assi) stands out as the conflicted leader fighting for his life and integrity. Oshri Cohen (Hertzel) and Michael Moshonov (Yigal) also capture the harshness of their characters magnificently.

The film’s cinematography is original and brilliant. Writer-director Samuel Maoz effectively chose to show only the perspective of the four crewmen. In the film, the viewer only sees the interior of the tank; anything shown outside is seen through the lens of a periscope gunsight.

Maoz provides a realistic account for those who will never face the cruelty of combat. He fought in the 1982 Lebanon War as an Israeli soldier and began writing the script 25 years after the start of the Lebanon War, basing the film on his experiences.