Baseball in the Age of the Apocalypse: Part 1 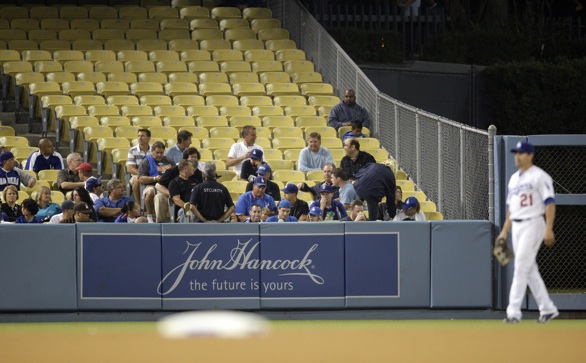 The Mannywood sign at Dodger Stadium has been replaced by an advertisement.
(Credit: Gina Ferazzi/Los Angeles Times/MCT )

With the Dodgers struggling to stay out of fourth place in their division and a whirlwind of bad press about the ownership in recent weeks, it seems only natural to have thoughts about the end days and be troubled with existential crises. You find yourself asking, what does it all mean to be a Dodger fan, or simply even a baseball fan in this world of gluttony and greed, waste and want. At a recent ballgame, the thought struck me: Being a fan of Major League Baseball is a lot like eating meat. You know there are heinous practices behind the product you consume, but it tastes so damn good. There is cruelty, heartbreak and moral outrage, and yet you can’t resist. A good ballgame is like a strip of filet mignon or a seared tuna steak; rich in flavor, savory to taste, physically fulfilling. And yet every meal is tainted by lurking thoughts of environmental decay, of burning rainforest, of depleted fish populations. The planet is in peril you know, but you go right on eating. The question is: How do we reconcile our passion for the game with those ugly practices of major league sports, which are destroying our world?

Baseball is unique among sports. Is there any other game that excites the imagination and inspires visions of glory quite like it? It is a strange game involving so much anticipation, so much steady worry; a game of patience, of waiting, a game that some people mistake for being slow. When things happen in the game, they happen lightening quick – the 95-mile-per-hour pitch, the 120-mile-per-hour ricochet of the ball off the bat. In these moments of sudden action, the attention of all is focused. Baseball is, above all, a game of fixed points of attention. When dozens, hundreds, thousands or millions of people focus their attention simultaneously on a little white ball, there is a mysterious unity.

Then there are the curious rituals of the game: the singing of the anthem, the rules of engagement carefully observed by the players and upheld by umpires in dark suits. If an alien were to stumble upon a game in play he/she/it might mistake it for a religious ceremony.

Indeed, there is something about the game that inspires a kind of religious mania, a sensation of something sacred at hand. Fans can resemble zealots complete with a desire to convert the uninitiated. I know that whenever I go to a ballgame with friends, I am secretly hoping they will be as captivated as I am, that the game will come to one defining climactic moment and seduce yet a few more fanatics.

The Dodgers have a history of using religious references to describe their home field. The road that travels around the stadium is called Elysian Park Avenue, a reference to Greek mythology’s notion of paradise. The inner confines of the stadium are commonly referred to as “Blue Heaven on Earth.” Even the stadium itself, with its highly praised classic design, has been playfully called the Taj Mahal of ballparks.

There is something sublime about the game that calls to mind a vision of paradise and was not lost on the people who built Dodger Stadium. The point seems particularly urgent today as corporate interests increasingly dominate the game and the modern stadium. Dodger Stadium is a perfect case in point.

I can still recall my first impressions of the stadium as a child and pinpoint the moments I was converted to the baseball faith. Like a peasant in medieval Europe wandering into a gothic cathedral, I was dumbstruck by the grandness of it all: the massive green field, the multiple levels, the hills around the stadium.

Dodger Stadium was a very different place back then. Looking out toward the outfield you could count exactly two circular orange logos for 76 Gasoline above the scoreboard and big screen. At present there are 43 fixtures of advertising that sell everything from Kaiser health insurance to gambling at San Manuel Indian Bingo and Casino. These don’t include the two screens built into the outfield fences, which shine in bright lights multiple ads throughout the game.

An electronic strip over a thousand feet in length wraps around the field along the length of the grandstands just below the loge level section. They flash brightly lit graphic ads throughout the game. LED screens have even been installed on the sides of the field and behind home plate. These also run during the game. Then, of course, there is the big screen television above left field that broadcasts commercials during innings. To watch a game at Dodger Stadium these days is to be assaulted by advertising on all sides. The sacred unity of attention which baseball possesses is thus disturbed by all the noise of advertising. In this time of change, when questions abound about the future of the Dodger organization, it seems worthwhile to remember where they’ve been, see the present for what it is and dream a little about what the future might be.