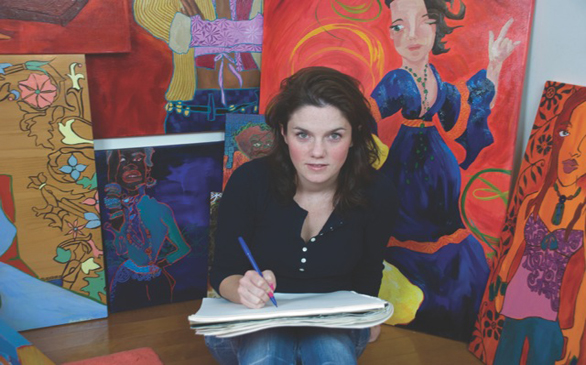 Bobbie Rich is one of the artists featured in VOCA's upcoming exhibit.
(Credit: Rebecca Kim)

After calling cities like Duluth, Ga., Richmond, Va., Barrington, Ill., Amherst N.H., and Clinton, N.J., home, Bobbie Rich has carved out quite a niche for herself as an artist in Los Angeles. She collaborates with and draws inspiration from Women Painters West, a group of women artists who are based in the L.A. metropolitan area.

Rich began to express herself artistically at a young age. She even won a drawing contest with the crazy submission of an amalgamation of two of the most unlikely animals: a unicorn head on a crab’s body. During high school, when Rich wasn’t creating artistic works, she was participating in musical theater and performing in classic productions like “Fiddler on the Roof.” Though she enjoyed the stage life, there was no denying she gravitated toward her artwork. She began to take interest in all types of art and a plethora of artists, settling on surrealism and Dali.

“I remember I would make these trees really detailed with pen and ink, but the trees would just be made up of body parts, like eyeballs. It wasn’t gory at all. They were very refined and made out of little dots that took patience,” she says.

“I thought advertising would be the more intelligent way to go about art, so I studied advertising as well as art,” she says. “I worked in advertising a little bit, but I was not cut out for a desk job. I liked coming up with the ideas, doing the thumbnails and pitching to clients, but I did not like sitting at the computer and doing it on my own.”

“I really enjoyed interacting with them, how excited they would get about the art and that’s what they would look forward to in the day,” she says. “I knew that I liked working with people and sharing art.”

Rich wears more hats than one can imagine. Not only is she an artist and painter; she’s also a teacher. She offers in-home private and group art classes to adults as well as kids.

Diane Karpel and Andrea Raft are Rich’s mentors at Women Painters West. They took Rich under their wings when she joined, and now she is part of this very thriving, creative, close-knit group of women who come together to lend support, discuss and mentor new entrants into the 90-year-old legacy. Each woman has submitted two pieces for a collective exhibit that opens Aug. 14 at VOCA Gallery on the Venice Boardwalk.

Rich’s style of painting is a beautiful mixture of the two focuses she had during her college years: She blends photographs with art. She also incorporates beautiful patterns, vibrant colors and friends of hers in her paintings, which adds a personal touch. Her artwork is thoroughly intriguing and it’s easy to see why she’s such an excellent teacher.

Rich gives the best advice to those attempting to break into the art field or just wanting to dabble in it.

“It’s important to try all different styles so that you know that you can do them and that you’re confident,” she says. “There’s no way you can know what you’re best at or what you enjoy the most if you haven’t tried the spectrum yet. Be persistent about trying to show your work. Keep putting yourself out there.”

The opening reception for Women Painters West Group Exhibit is Saturday, Aug. 14, from 6 p.m. to 9 p.m. at VOCA Gallery.