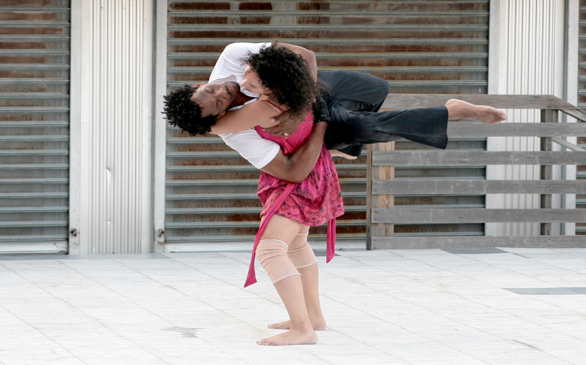 Nehara Kalev and C. Derrick Jones are two extraordinarily artistic people who express themselves beautifully as a unit. They stray from the norm of the 21st century couple.

There are many couples in which each party works in a very different setting. Then there are couples like Jones and Kalev, who spend their days collaborating, creating and honing the crafts they learned as singulars until they’re fully ready to debut these works to awaiting audiences.

“In our work, we cross the genres because we are not solely dance, theater or aerial dance,” explains Jones. “We are very much multidisciplinary, and it’s hard to pigeonhole us. We call ourselves dance, theater and reality performance as a name that we know people will have questions about.”

The craft they show to the world is also an aerial act. Their performances at times involve either party acting as a counterbalance to the other, which can be a daunting feat in itself.

Kalev is a New York City native whose mother immersed her and her sister in the arts at a very young age. Kalev went on to study dance during her formative years at the High School of Performing Arts, renowned for cultivating scores of young students into professional stage performers and artists. Though Kalev had given up dance upon leaving New York, she continued her academic career at Oberlin College, a small liberal arts college in Ohio, and found the environment to be supportive of contemporary dance, thus reigniting her passion.

Jones is a Pasadena-born product of the Berkshires in Massachusetts, known for its cultural and artistic life and culture. Jones’ life was enriched at a young age via trips to ballets, theater, Shakespeare plays and orchestra performance, which sparked his interest in dance. He began studying dance at the University of Vermont, moving into movement and theater. He then came to Los Angeles and fell under the tutelage of Rachel Rosenthal, who would serve as a mentor to the couple. After meeting Kalev at the UCLA’s MFA program in dance choreography, the duo went on to travel and work together with Diavolo Dance Company.

“We create aerial dance, and we like the aerial spectacle because it speaks so truthfully and honestly about the focus that two people have to have externally and internally towards each other,” says Jones. “That’s such a strong metaphor for relationships and for our marriage.”

The couple proves to their audiences yearly how dedicated and syncopated two people can be with their wedding anniversary shows serving as public demonstrations of their enduring love for each other and the crafts they spend their lives perfecting. Their current show, “Iron,” not only serves as a presentation of their work, but also as the sixth wedding anniversary for the couple. As an aerial act, Jones and Kalev incorporate their respective expertise, which can be an overwhelming task to accomplish for some, but not a power couple like this.

“People understand how much we trust each other,” Jones starts, “but the depth to which we have to be in tune with each other is not really spoken about.”

There is a definite level of trust that is needed when your loved one is hovering yards above your head and the only thing keeping them in balance and suspended is you.

“These two people need to really trust each other, and to trust themselves, to take care of everything in every moment,” assures Kalev.

The performance of “Iron” is a beautiful amalgamation of two beyond-talented people who would probably be creating and brainstorming ideas even if there wasn’t an audience anywhere in sight. Kalev and Jones’ show is a beautifully crafted performance incorporating theater, dance and reality pieces. It is definitely a show that is not to be missed. However, please try not to recreate any of the maneuvers you see on stage. Leave that to the professionals: the loving, dynamic duo of Jones and Kalev.