Every Time I Die: When in Rome… 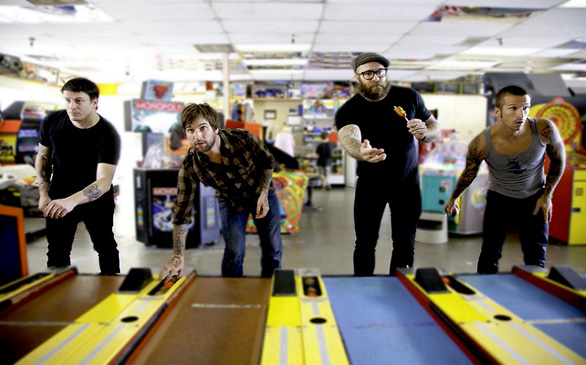 For those familiar with Every Time I Die, the band’s name has come to be nearly synonymous with “party.” Not the neon, child and parent-friendly dance party you’re likely to find on most of this year’s Warped stages, though. No, the Buffalo-bred hardcore act has a reputation for partying a little harder than that. They like cheap beer, they ride motorcycles and they thrash and shred harder than you do.

“I pride myself on my tweets,” he says.

“[Twitter] was just a good forum to write stupid, random thoughts and have them all saved. It’s kind of like bouncing material off people and seeing what they say about it. If you have attention deficit disorder or are a narcissist, it’s perfect.”

What category does Buckley fall into between the former and the latter, then?

“Every single one of them. It’s perfect for me,” he says with a laugh.

One listen to the band’s latest album, last year’s New Junk Aesthetic, and some of Buckley’s more long-standing vices are more readily available.

“Maker’s Mark and water is what got me through writing the record,” he says. “I think over the course of writing, I collected nine empty bottles of Maker’s Mark.”

Unlike Twitter, however, this habit ended up yielding some of the album’s best tracks.

“I was just drinking in my living room, and the first line of ‘Marvelous Slut’ just came to me,” Buckley says, “It all followed real quick afterward and kind of wrote itself, but that was one that kind of came out of nowhere thanks to alcohol.”

With five albums under his band’s collective belt now, and New Junk quite possibly being their most raw, gritty and ambitious album to date, Buckley’s fast-living approach to his life and his music seems to be the key to his band’s success.

“I think the people that care less about their lives have the best ones,” he says. “If you’re willing to give up everything to pursue what you love, even if you’re sleeping nine deep in a van, it’s the best way to make memories and get life experience.”

But even he has his limits.

Buckley’s one rule: “If you wouldn’t admit it to your parents, you shouldn’t do it.”

Interviews
Searching for hope? Kacey Musgraves’ ‘Rainbow’ is a psalm, and balm, for the pandemic era
629 views

Interviews
You might think, ‘Who asked Dashboard Confessional to come back?’ Chris Carrabba has some answers
657 views

Interviews
Billie Eilish isn’t stressing over the Grammys. She’s busy worrying about the end of the world
1,154 views

Interviews
With new fans aboard, Korn shows how to metal in middle age
1,062 views