Blizzard of Ozzfest: Ozzy Osbourne returns with his Metal Merrymakers. 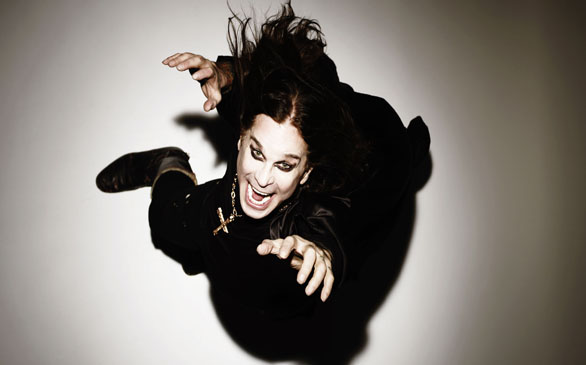 “I had my transistor radio by the side of my head, walking down the street, and I heard ‘She Loves You’ for the first time,” says Ozzy Osbourne about a musical inspiration that changed his life. “That was such an amazing experience for me. From then on, I wanted to be a Beatle.”

A Beatle he wasn’t, yet Ozzy Osbourne’s success has certainly rivaled the Fab Four, having sold over 100 million albums during his solo career and with Black Sabbath. Top it off with Grammy Awards, being inducted into the Rock and Roll Hall of Fame and garnering a whole new generation of fans by starring in the popular MTV reality show, “The Osbournes.” In 1996, Osbourne and wife, Sharon, kicked off the first national heavy metal music festival, Ozzfest, now in its 14th year.

“We had no idea, in the first place, it was going to take off as big as it did,” he shares.

The idea was inspired when Osbourne was rejected by the Lollapalooza music festival. In true Ozzy style, he and Sharon then developed their own touring festival, infused with heavy metal bands and promising up-and-comers. In the past, Ozzfest featured names like Pantera, Tool, System of a Down, Slipknot, Incubus, Metallica, Iron Maiden and Rob Zombie. Ozzfest 2010, which hits the San Manuel Amphitheater in Devore Aug. 14, boasts more stellar metal gods such as Osbourne’s former guitarist Zakk Wylde with Black Label Society on the second stage and Osbourne, Rob Halford (Judas Priest), DevilDriver, Nonpoint and rock’s bad boys and L.A. natives Mötley Crüe on the main stage.

“I haven’t been on set with Mötley Crüe since 1984,” says Osbourne with a nostalgic glint in his eye. “It was one of the most intense tours I ever did, in the respect that we were all fucking crazy, you know?”

Being the poster children for rock’s “sex, drugs and rock ’n’ roll,” both Mötley Crüe and Osbourne were kindred spirits; spirits being in the form of alcohol and other addictive drugs.

“When I discovered alcohol and drugs, it lifted me up. It made me feel better,” recalls Osbourne.

Yet drug addiction has led to some of his most image-searing moments. Who hasn’t heard of the time when Osbourne bit off the head of a dove during a record label meeting? Or when he bit off the head of a live bat during a show? And how about when he, in a drunken stupor, urinated near the famed Alamo in Texas, got arrested and was subsequently banned from San Antonio for a decade? All true.

Osbourne is painstakingly honest about his battle with addiction and its horrendous consequences in his autobiography, I Am Ozzy.

“I have an addictive personality, but I don’t do that anymore,” he admits. “I want to live a little longer.”

Osbourne now gets his best high from playing live.

“When everything’s in its right place and my voice is on form and the crowd is giving me some craziness, there’s nothing in the world to come close – love, sex, drugs – there’s nothing that can touch it,” he says of the euphoric feeling when a show goes off. “It’s just amazing. It’s the best feeling you can ever have in your life.”

Performing for the first time at this year’s Ozzfest are songs from Osbourne’s latest CD, Scream. His set also includes favorites like “Crazy Train” and “Paranoid,” along with songs from his Black Sabbath days. Speaking of his former band, Osbourne says they are in talks about possibly doing another record together.

“To be honest with you, I would love to do a killer Black Sabbath album. It would make my life! The whole thing would round up perfectly for me. I’m not saying it will or it won’t [happen]; I don’t know. But if it did come together, it’d be great.”

After surviving almost four decades in the music, what more could the Prince of Darkness want to achieve?

“I’ve never had, believe it or not, a No. 1 record in the United States ever, even with Black Sabbath,” he says. “That’s about the only thing I’ve got to achieve.”

Yet after a moment in thought, Osbourne shares a secret.