VersaEmerge: Turning Zero up to 11 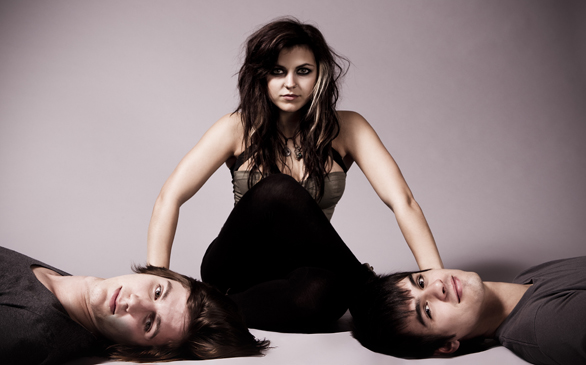 “‘What’s it feel like being compared to other girl bands?’” says VersaEmerge frontwoman Sierra Kusterbeck in a mocking tone followed by a laugh, a teasing jab at the interviewers who have made the question an interview staple of late.

Though she jokes that she’s sick of hearing it asked, and it should be noted that it was most definitely not asked during this interview, the significance of the question remains. Not so long ago, the go-to question for band-fronting songstresses was, “How does it feel being a girl in a band?” But that was then. Nowadays, members of the fairer gender are as commonplace on stage as they are in audiences within the modern rock scene. Depending on what band you’re seeing, they might even be in the majority. It’s … almost a little passé, even.

In a genre where seemingly any girl can pull on some Chucks, weave in some platinum extensions, hire backing musicians and call herself a band leader, it takes a special one to stand out from the pack.

Kusterbeck is indeed one such frontwoman.

“I want to be a good lyricist,” she says. “I think that’s lost a lot now, so I really want to work hard on getting better, and I think trying new things is what makes you better.”

The Florida-bred melodic pop-punk band’s debut full-length, Fixed at Zero, sees Kusterbeck putting the proverbial money where her mouth is, with a collection of songs that are anything but the usual pop clichés. Kusterbeck specifically cites the slow-building track “You’ll Never Know” as a personal favorite on the album for challenging her songwriting ability.

“I kind of stepped out of my box and went a little more vulnerable with writing lyrics,” she says of the song. “I’m usually very coded. I use a special ‘Sierra-code’ of writing so people can take it out of context and make it mean whatever they want for them, so I feel kind of proud of that one.”

Not to be outdone, the album likewise showcases guitarist Blake Harnage and bassist Devin Ingelido as skillful musicians of their own right, creating a songwriting trifecta with Kusterbeck of widely varied influences and technical approaches. From the anthemic lead single, “Fixed at Zero,” to the car-chase-soundtrack choruses of “Fire,” to the dark and haunting grittiness of “Redesign Me,” each of the three shows the full expanse of their capabilities on the album while maintaining the songs’ cohesiveness.

“Each song on the CD I think has its own purpose in making the album full-circle, making all the songs tie together rather than just having the same song over and over again,” says Harnage.

“We started writing and demoing before Warped last year, so it was a pretty long time ago, over a year ago,” Harnage says of beginning the process for Fixed. “We were kind of afraid, like, all the pressure’s on us. This is our debut full-length and the first time we could define what our band is.”

With a final product that proves to be as sprawling and cinematic as it is hard rocking, though, the key to the album’s success was in the sonic dynamics.

“When I first met Blake and Devin and joined the band, they made it very clear, even for the EPs, that we want this to be a whole, to have a flow, to have its ups and downs, no flatlining,” says Kusterbeck.

“It’s like, you’re driving down the road, and then, bear right. Actually, it’d be ‘bear left,’ because we’re more left of center,” she says, adding with a laugh, “Screw the right.”

Truly, a girl after our collective hearts.

Just as the mood and tone of their songs can veer from dark and emotive to aggressive and high energy at a moment’s notice, so too has audience response been all over the map. Not that such a thing would discourage either Harnage or Kusterbeck, though.

“You can’t cater to everyone’s likings in the end,” says Harnage. “I think you need to have just as many people hating your band as liking your band. Because the people who like your band are going to like you a lot more than if everyone kind of likes your band.”

Luckily, the numbers seem to overwhelmingly favor those in the former category, rather than the latter. And they’re only getting bigger from here on.