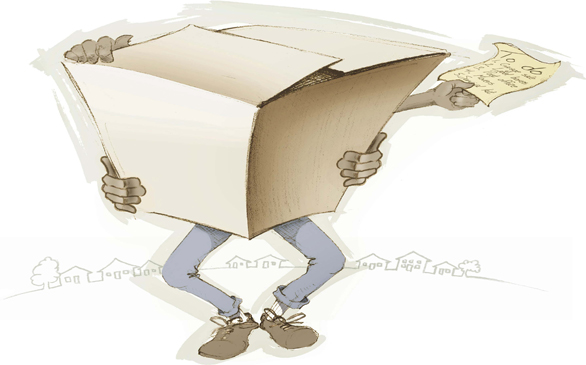 It is perhaps the bleakest financial situation since the recession of the early 1990s. Foreclosures have increased tenfold; unemployment has climbed to over 12 percent. Not only that, but economists are conflicted as to when it will officially end. This dire uncertainty has caused many inhabitants of California to reconsider their choice of home and relocate to other areas.

Since 2008, Texas has become the top destination for many. According to the Los Angeles Times, 135,173 people moved out of California between 2008 and 2009. For some, it is the high cost of living that drives them to other locations. For others like David Post, it’s the job market.

The 31-year-old architect has been working odd jobs and temping since losing his full-time position in 2009. Post will soon move out of California and try his luck in the twin cities of Minneapolis-St. Paul.

“My friends think I’m crazy for leaving, but they all have jobs,” he says. “The housing bubble screwed me here. There, I have my sister and some friends from high school, so it’s a better security blanket if I run into trouble.”

“We grew up on ‘90210’ and West Coast rap. I kind of believed in that and those stories. But it’s nothing like that in real life,” she says. “We’ll never have a house out here because these houses sell for millions of dollars each. The traffic is stupid – 30 minutes to go up the street? Come on!”

Motts-Donner moved to Burbank with her boyfriend in 2007. After freelancing for a year, she found that getting hired full time was an uphill battle.

“I have a degree, but somehow, I’m a temp?” admits the 26-year-old aspiring actress and chef.

Relocation is sure to squash aspirations of acting fame and fortune, but Motts-Donner is undaunted.

“Hey, I can always do community theater. I’m just not cut out for being poor and living in the boonies.”

“For most of us, the answer is simple; we feel it in our bones. But for others, it can be hard to give up on your dreams so easily. I usually tell my clients that it might be time to pack it in if they’ve been out of work for over a year or if they haven’t made any significant advances socially or professionally after the same [amount of] time,” she says.

Of course, there are currently no cities in the United States that are completely impervious to the recession and its fallout. And while California has the highest sales tax and some of the worst issues plaguing the individual states, it is still chock full of great weather, unmatched culture, glamour and beautiful natural resources.

Devi Patel regrets her decision to move in January 2010. The art school graduate packed up her small U-Haul and headed east to Austin, Texas. She is currently saving up to move again.

“I hate it here. I thought Austin would be so cool. I always had fun at SXSW, but I think it’s one of those places you visit but don’t live in,” says Patel.

“What do I miss [about California]? Everything. I miss the craziness. I miss hiking. I miss seeing the Lakers – courtside,” she says, laughing. “Austin is nice, but it’s slow. Or slow for me.”

Patel hopes to return to Los Angeles as soon as possible, but notes that her relocation may take a while.”

“I found work here as a nanny for this really cool family, but I’m making just enough to cover rent and my student loans, so, we’ll see. I just wish I’d stuck around. You know it’s bad when you’ve lived somewhere for six months but you still call L.A. ‘back home.’”

California has been down before, but has managed to bounce back. Still, when choosing whether to stay or go, it may be important to factor in long- and short-term needs and wants first. After all, the grass may not be greener on the other side.