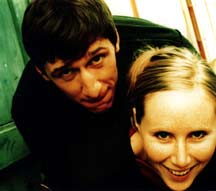 Besides being the most un-obnoxiously adorable music couple in existence today, Mates of State is a husband and wife duo that magically transforms two voices, a keyboard, and a drum set into a fully satisfying poppy mix of harmonies, organ and minimalist touches. Kori Gardner and Jason Hammel are in the midst of a busy year. Yet in the middle of moving from a San Francisco apartment to a love nest in Connecticut, recording a new album, and re-releasing their impossible to find debut album My Solo Project, Jason still managed find some time after the couple’s morning jog (seriously, you have to admit that’s cute) to chat with Campus Circle about the band’s love for music, performing and each other.

CC: Besides re-releasing My Solo Project, you’re also starting with material for a new album. How’s that going?

Jason: Since we’re not working right now, we’re just trying to set up a schedule where we force ourselves to be evolved, and either playing or listening and writing down ideas concerned with music, several hours a day. So we’re doing that and it’s actually really fun and exciting. We didn’t really get to do that in San Francisco because it was at a time period where we were either working or just touring all the time, so we never really got that kind of time to just concentrate on writing.

CC: The lyrical relationship between the two of you on most songs sounds almost like or an argument, or call and response. What is your songwriting process?

Jason: We just sit down behind our instruments and start playing a part and when we come up with something we like, then we will add lyrics and vocals. And we both like to sing, so that argument thing you talked about might be the fact that we’ll both have a melody, and we’ll both be singing ours, and at one point we’ll come together and we’ll be like "Oh, I like that" and "I like yours," and so we’ll both be singing different melodies and it will come together at some point, usually–sometimes not. Maybe it is an argument.

CC: All of the songs seem to revolve around boy-girl relationship kind of things. Do you find it hard to separate your relationship from the music at all?

Jason: That’s kind of one of the big misconceptions of our band. There are actually very few songs that are specifically about our relationship. But I can see where they make that mistake because it’s about our personal lives, … and usually we’ll have similar opinions or different opinions about a certain topic so it will look like we’re talking about the same thing, and either being madly in love about it or arguing about it, and then we usually resolve it by the end. And our answer is usually, "We can have different opinions about it and it’s fine." But people will be like, "Oh, they’re making up. They were fighting and now they’re making up!"

CC: I know from my own standpoint, I think maybe it’s that people want to think that you’re singing about your relationship. I wonder if the "cuteness" factor, stemming from the fact that you also happen to be this adorable couple, interferes with what you’re trying to do musically.

Jason: Yeah, especially if they set up expectations for it and they’re not met, then they’re like, "Oh, that song sucks" or "This album sucks," because they wanted another, "I love you baby, what’s happening?"

CC: In your live show, filled with exchanged glances and giggles, it seems like you guys are almost playing for each other as much as you are for the audience.

Jason: It’s really hard to say. I honestly don’t know how to answer that question, because, playing music together is like sitting down for dinner, it’s just something that we have to do and we need to do and we want to do, because we’re hungry.

(And if that doesn’t make you kinda mushy inside, you have no soul.)