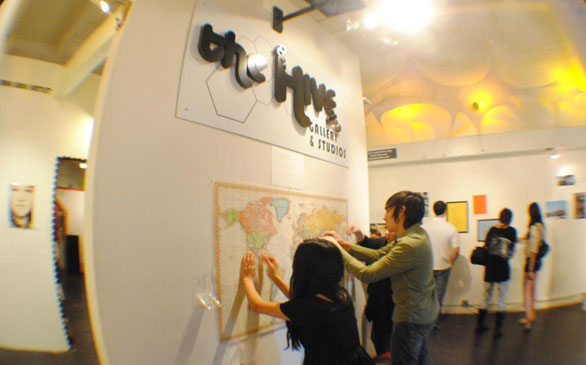 Multiracial students at USC like Lauren Perez are devoting time to create a place where you can express every part of yourself. HapaSC is an organization of about 30 USC students that raises awareness for “mixed” students on campus and allows them an opportunity to embrace world change.

The phrase “hapa haole” means “half.” The term was originally used to describe people who were half Asian/Pacific Islander and half Caucasian. It has now been shortened to just “hapa.” HapaSC’s purpose is to create awareness for the rapid expansion of multiracial people.

“We understand that identity is something you can choose and it’s always developing, so we don’t put people in a box,” says Perez, last school year’s public relations officer.

“I met one of my best friends and current roommate through HapaSC. Our community is very supportive and many of the friendships I have formed through HapaSC extend beyond the organization and stand on their own,” says Marissa Hui, last year’s vice president and current HapaSC president.

Last April, HapaSC sponsored an art show, HAPArt, at the Hive Gallery in Downtown Los Angeles. As promised, it was more than just an art show. The event featured HapaSC’s members’ artwork ranging from acrylic to screen prints to a cotton fabric quilt. There was poetry and even a 10-minute play. Five musicians provided live entertainment for attendees. Visitors were invited to observe the entirety of the Hive’s artworks as well.

Among the works displayed were three of Perez’s poems. In her piece, “Mixed Girls,” she opens, “I am mixed. Yes my blood is multinational. It may be rich, but it’s still red.”

“HAPArt was great because it showcased the way we see ourselves and what our own experience is as a mixed person. It really furthered our cause of highlighting mixed culture as a real thing, not just people who are not ‘enough’ of any particular race or culture,” says Perez.

“For me, putting my art on display for other USC students and the public was a way of saying, ‘I’m proud to be mixed,’” says Hui.

“We’re a smaller club, but we’re able to pull off such great events,” says Perez. “Everyone is very welcoming and everyone is allowed to be themselves.”

HAPArt is far from the only event the club has hosted.

“Last semester we volunteered at a shelter for mixed dogs. We chose mixed dogs on purpose because we thought, ‘Hey, they can be mixed race or breed too.’ Sometimes I even call myself a mutt, though a lot of mixed people prefer not to use that term for themselves,” says Perez.

Perez has served as the public relations officer for the past two years.

“I can’t even express how valuable the working experience has been and how much it has prepared me for future work,” she says.

Because it is becoming increasingly difficult for mixed race people to find marrow donors, a representative from Mixed Marrow attended HAPArt to allow multiracial students to register to be marrow donors. Mixed Marrow recruits donors for Asians for Miracle Marrow Matches (A3M), a recruitment center for Be The Match Marrow Registry.

Unlike blood or organ donation, this unique contribution is based on genetic typing, not tissue typing. The mixed population is actually the smallest group of donors and the most difficult to match. If you are mixed, there is only a quarter chance that you will match your own sibling.

Mixed Marrow’s Athena Mari Asklipiadis joined the art show to encourage people of mixed backgrounds to donate. While she is passionate about the organization, she admits recruitment isn’t easy.

“It’s hard because people are afraid of needles,” Asklipiadis says.

Hui feels fortunate that she has been able to see the group develop during her time in the club. Since her start with the club two years ago, it has doubled in size.

As for this year, Hui says, “I’m just looking forward to seeing the club grow and, hopefully, it will become more diverse.”

For more information, visit hapasc.org.
Article posted on 8/16/2010
This article has been viewed 2955 times.