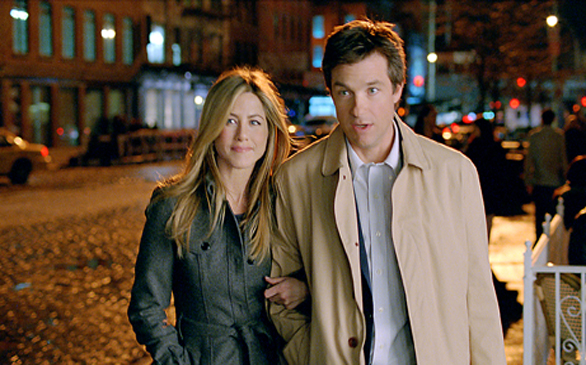 The Switch isn’t a politically charged movie, but its stars have sure ruffled a few feathers. Usually TV’s talking heads create an uproar over films involving issues like the conflict in the Middle East (any war movie released in the past eight years or so) or historical movies that fudge or embellish historical facts (Inglourious Basterds). But with The Switch, Bill O’Reilly called Jennifer Aniston “destructive to our society.” I can think of 20 people I know who are more destructive to our society than Aniston, and I’m not exactly hanging out with a bunch of felons, either.

So how is our beloved Rachel Green so destructive to society? At her recent press tour for The Switch, Aniston remarked that women don’t necessarily need a man to raise a child.

Of course, women need a man to conceive a child, which is the premise for The Switch. In the dramedy, Aniston plays Kassie Larson, a single woman who decides she wants child. So her best friend Debbie (Juliette Lewis) throws her an insemination party.

The stud of the evening, Roland (Patrick Wilson), donates his ingredients, which will then be used to impregnate Kassie later that night. Jason Bateman plays Wally Mars, Kassie’s best (and lovelorn) friend. In the midst of a blackout drunken stupor, Wally replaces Roland’s “ingredients” with his own.

Anyone who has a head knows that Aniston has been on the cover of a few tabloids in her time. Between the whole Brangelina thing and her supposed subsequent search for love and children, nary a week goes by that we don’t see Aniston at our local supermarket checkout lane. The whole premise of The Switch eerily resembles the recent tabloid fascination with Aniston, so, of course, (too) many reporters continue to bring this up at the film’s junket.

In response to one reporter’s question about the insemination question, Aniston replies, “Women are realizing more and more that you don’t have to settle. They don’t have to fiddle with a man to have that child. They are realizing if it’s that time in their life and they want this part, they can do it with or without that.”

Because of that remark, O’Reilly called Aniston “destructive to our society” because she’s “throwing a message out to 12-year-olds and 13-year-olds that, ‘Hey, you don’t need a guy. You don’t need a dad.’”

But Aniston is not pro-single parent. At the junket, she went on to say that all families are different; that not every family is a mother and father with two kids and a dog. So no matter what your “family” may look like, Aniston said, love is what matters.

All you have to do is pick up a paper, or log onto your favorite Internet news page, and you can easily find stories about nightmare fathers. Just because a family has a father, doesn’t make it a good family. We are now a global society. Many of us have moved away from our families and have created surrogate families in the process. What I believe Aniston was trying to say is that if you care and support each other, that is what ultimately matters.

Wow, maybe I had my feathers ruffled, too, and didn’t realize it. Anyway, Aniston wasn’t the only star of The Switch to create some controversy this week. Ever since the critically beloved cult favorite “Arrested Development” was axed, rumors have been swirling about a big screen version. Like how Aniston is constantly asked about her love life by reporters, Bateman is constantly asked about a potential Arrested Development: The Movie.

I have to admit I was the guilty party at this junket. (What can I say? I need more of the crazy Bluth family.) I guess at an earlier interview, Bateman jokingly said that, yes, the movie was set with longtime friend Aniston agreeing to a cameo. The blogosphere went crazy within a day. I know, I know, it’s hard to believe that bloggers would take something out of context.

So when Bateman and Aniston answered my question, they were very careful to say that, no, the rumors of a “Friends” movie are just rumors, while there is a possibility of an “Arrested Development” movie, but nothing is set in stone yet.

I’m keeping my fingers crossed though, for a Jennifer Aniston cameo in the “Arrested Development” movie. Aniston and Bateman do have good chemistry, and I’m curious about what controversy their next outing together, Horrible Bosses, might create.